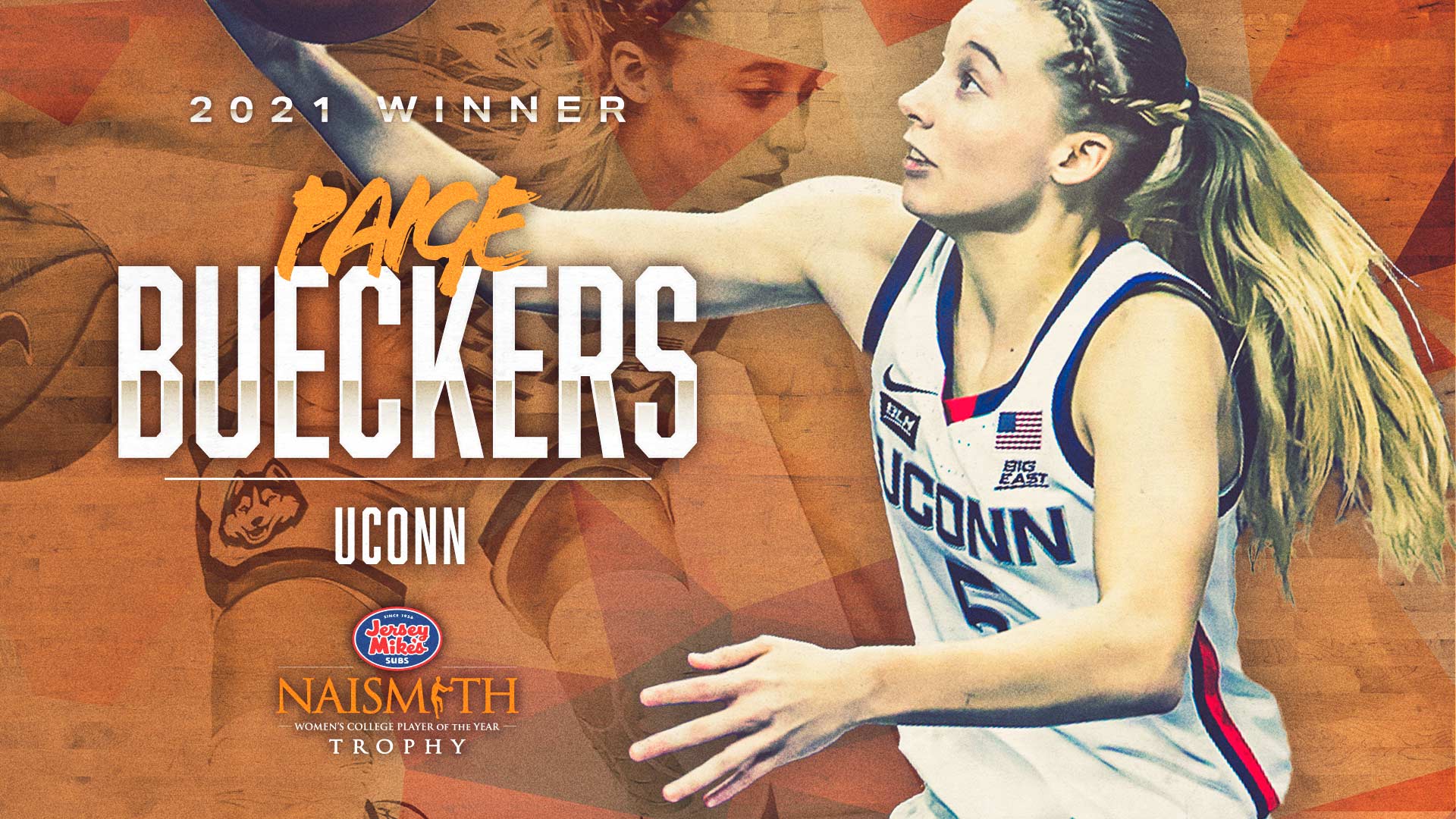 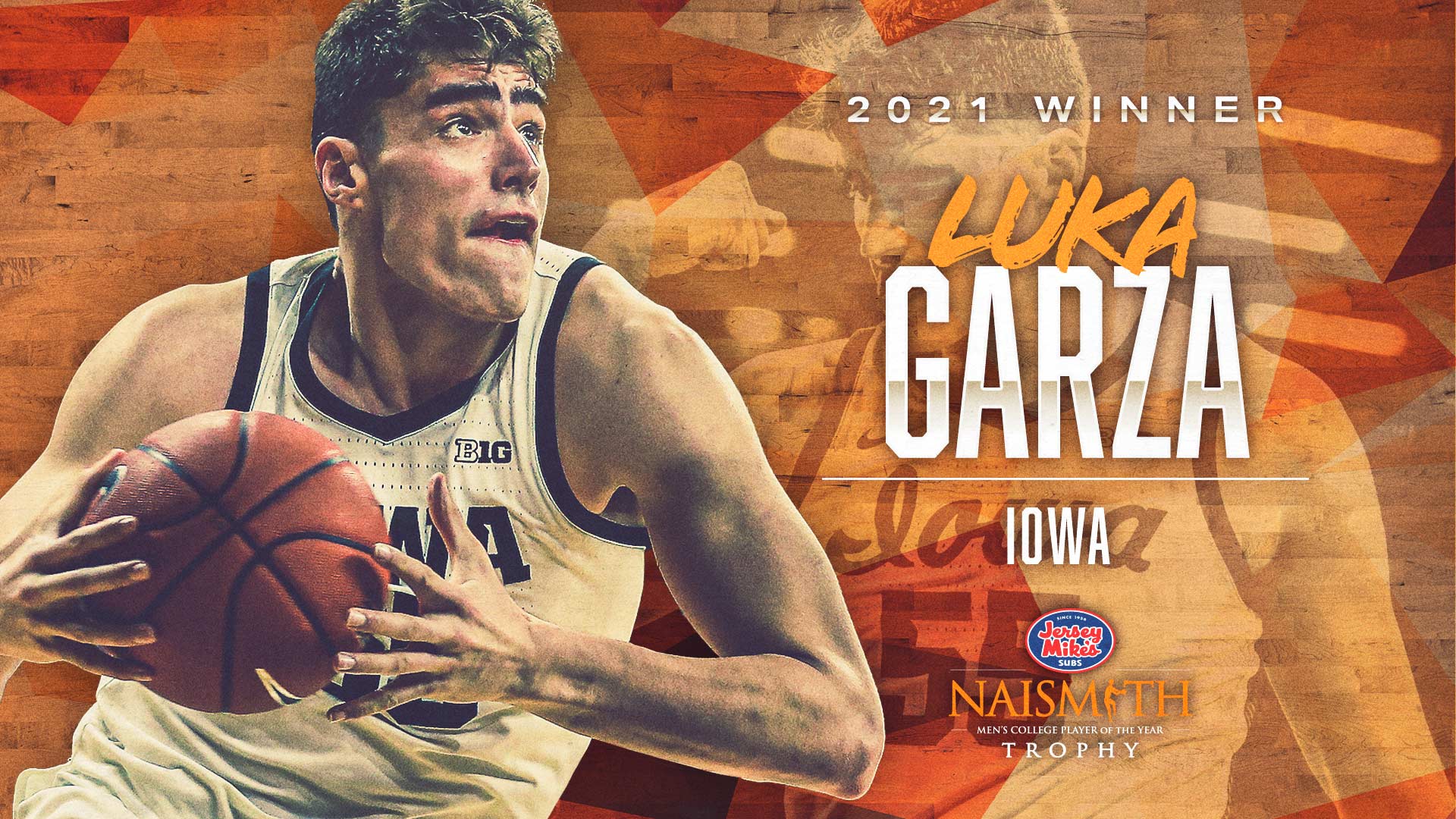 Bueckers, the 2020 Jersey Mike’s Naismith High School Player of the Year Trophy winner, becomes the first freshman in the 39-year history of the women’s collegiate award to take home the hardware and just the fourth first-year player ever, following men’s winners Kevin Durant (2007), Anthony Davis (2012) and Zion Williamson (2019). Garza, a Naismith Trophy finalist in 2020 and now the 53rd winner in the storied history of the award, becomes the first Hawkeye to win the Naismith Trophy on the men’s side.  With former Hawkeye Megan Gustafson winning in 2019, Iowa now joins Duke, LSU, Notre Dame, Texas and Virginia as the only schools ever to win both a men’s and women’s Naismith Trophy.

The winners were announced live earlier today on CBS Sports Network by Barry Goheen, Atlanta Tipoff Club chairman. Bueckers and Garza will be honored on their respective campuses this spring and presented with the iconic Naismith Trophy, originally sculpted in 1982 by Atlanta’s Marty C. Dawe. The trophy is produced and provided by Herff Jones, leading provider of graduation and educational products and services designed to inspire achievement and create memorable experiences for students. A replica trophy will be donated by Herff Jones to the winners’ respective universities.

“Luka just concluded a remarkable college career and had tremendous expectations to live up to all season long, and while Paige is just beginning her college run, she had similar acclaim given her incredible high school achievements. The common denominator is that both displayed complete dominance on the court throughout the course of an incredibly challenging basketball season, and for that, we’re honored to recognize them as the 2021 Jersey Mike’s Naismith Trophy winners,” said Eric Oberman, executive director of the Atlanta Tipoff Club.

“I feel incredibly blessed to receive the Naismith Trophy. It was an honor to receive the high school award last season, and truly, it’s surreal to receive the collegiate award this year,” said Bueckers. “My teammates and coaches are the reason I had any individual success this year, so thank you to them for being by my side all season. There are so many talented players who are deserving of this award, like Aliyah, Dana and Rhyne, so it’s humbling to receive it.”

“Winning an award in Naismith’s name is an honor my family and I will always treasure. Naismith changed my life, and so many others, by creating the game that so many love. In 2015, when my dad and I watched Frank Kaminsky accept the Naismith Trophy in Indianapolis, I never thought I would be in this position six years later,” said Garza. “I am forever thankful to the University of Iowa, Coach McCaffery, the rest of the coaching staff, my teammates, my family and the countless other people and coaches who have helped me along the way. This is not an individual honor but a team award, and I am so proud to be able to bring this award home to Iowa City. Thank you to the Atlanta Tipoff Club for this prestigious award and thank you to Naismith for changing my life and so many others with the game of basketball.”

“Jersey Mike’s congratulates Paige and Luka as the 2021 Jersey Mike’s Naismith Trophy winners, capping off remarkable seasons for both,” said Rich Hope, chief marketing officer, Jersey Mike’s Franchise Systems, Inc. “Each of the finalists were deserving of this award, but these two were dominant on the court seemingly every game and clearly separated themselves by season’s end to claim this honor.”

Bueckers became the second BIG EAST player to win both the Freshman of the Year and Player of the Year awards, following former Husky Maya Moore in 2008. Moore incidentally won two Jersey Mike’s Naismith Trophies in high school and two more at UConn. Bueckers had the highest single game scoring total by a UConn freshman since 2007 with 32 points. The freshman forward was the first player in program history to have three straight 30-point games. She led UConn to both regular season and tournament championships in the BIG EAST. Bueckers is the 7th Husky to win the women’s Jersey Mike’s Naismith Trophy, making it the 11th total win for UConn since Breanna Stewart (2014-2016), Maya Moore (2009, 2011) and Diana Taurasi (2003, 2004) won multiple.

Garza led all NCAA Division I players this season in total points scored (747 points) and ranked second nationally in average points per game with 24.1. He was named Big Ten Player of the Year for the second consecutive season, making him only the second player ever to accomplish that feat (Jim Jackson, Ohio State, 1991-92). He was a unanimous Big Ten First-Team All-Conference selection, and his jersey, No. 55, was retired on Iowa’s Senior Day. The senior forward became the Hawkeyes’ all-time leading scorer and the only men’s player in Big Ten history to have a resume that includes over 2,250 points, 900 rebounds, 150 blocked shots and 100 3-pointers.

Bueckers and Garza were chosen by the Atlanta Tipoff Club’s national voting academy, comprised of leading media members from around the country, current and former head coaches, former award winners and conference commissioners, all of whom based their selections on outstanding on-court performances during the 2020-21 college basketball season. Additionally, fans had the opportunity to cast a ballot through naismithfanvote.com and on the @NaismithTrophy and NCAA @MarchMadness Twitter pages. The Naismith fan vote accounted for 5% of the overall vote. The vote was tabulated and certified by Aprio, a premier, CPA-led business advisory firm, headquartered in Atlanta.