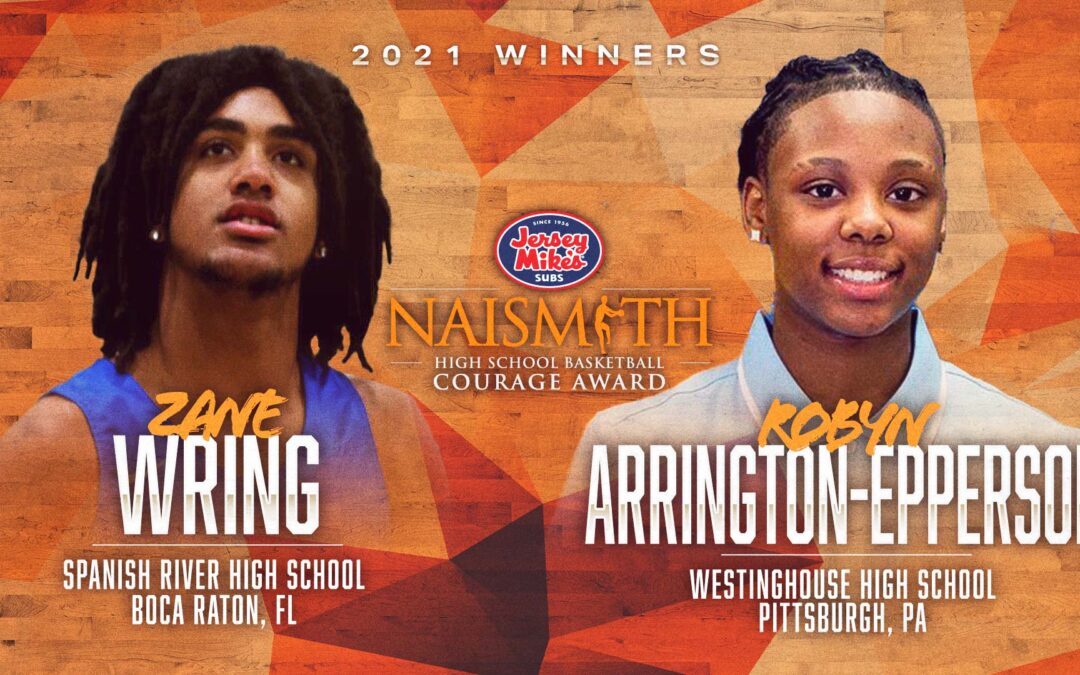 ATLANTA (April 14, 2021) – Today, the Atlanta Tipoff Club announced the winners of the second annual Jersey Mike’s Naismith High School Basketball Courage Award as senior Robyn Arrington-Epperson from Pittsburgh, Pennsylvania, and Zane Wring, a senior from Boca Raton, Florida. They will be honored in ceremonies at their respective high schools.

The Jersey Mike’s Naismith High School Basketball Courage Award recognizes a boys and girls high school basketball player who has consistently gone above and beyond throughout the basketball season and has demonstrated courage in their approach to their team, their school, the game and their community. The nationwide call for entries began on January 4, when the submission process opened to high school basketball coaches and athletic directors (or administrators) around the country.

Arrington-Epperson is the class valedictorian at Westinghouse High School, the first in her immediate family to attend college, a change agent in her community and the starting point guard on her championship-winning basketball team. On the outside, she has a perfectly normal and successful life. That’s really anything but the reality. She has battled and overcome everything from homelessness and foster care system run-ins to parental abandonment and abuse. She has endured early morning bus trips to school and late nights caring for her niece and younger brothers, all the while focusing on her post-secondary goals. Throughout it all, Arrington-Epperson has emerged as a role model for her younger siblings and peers to emulate. She is her family’s hope, the community’s hero and her basketball team’s motivator and leader. She encourages her classmates and teammates through personally written inspirational poems and speeches. In all, she has remained positive and upbeat despite being dealt serious challenges to overcome.

In his formidable years, Wring battled homelessness, foster care, family incarceration, a documented learning disability and the death of his father to become a star varsity basketball player, a student on track to graduate and a purpose-driven young man who has stolen the hearts of the teachers and staff of Spanish River High School. While living in a van with his parents and siblings, his academics suffered and playing on the basketball team was a distant—and unrealistic—dream. Had it not been for his aunt taking him in, his future most assuredly would’ve been clouded. Luckily, his aunt became the guiding light in his life, providing Wring stability and a purpose. He became academically eligible to play basketball and thrived on the court. His teachers admire his grit, vision, commitment and discipline. Said one administrator, “Our community needs more young men like Zane. He is an inspiration to us all.”

“Robyn and Zane exemplify what it means to display courage and to overcome tremendous hardships at such an early age, and we are honored to recognize them as Jersey Mike’s Naismith Courage Award winners,” said Eric Oberman, executive director of the Atlanta Tipoff Club. “They not only stand out among high school students, but they have become true role models for society at large.”

Hundreds of applications for the Jersey Mike’s Naismith Courage Award were submitted, leading to 10 national semifinalists. From there, the two winners were chosen by an esteemed Board of Selectors, which included key journalists, former Naismith winners and Atlanta Tipoff Club board members.

“The stories submitted for the Jersey Mike’s Naismith High School Basketball Courage Award program show the extraordinary strength of the human spirit,” said Rich Hope, chief marketing officer, Jersey Mike’s Franchise Systems, Inc. “We are inspired by Robyn and Zane who have shown tremendous courage and resilience despite facing challenging obstacles, and we congratulate them on their awards.”

Each winner will be honored at their school and with a special video feature of their story, which will be shared across the Naismith Trophy and Jersey Mike’s websites and social pages. Jersey Mike’s will also make a donation to the players’ high school basketball programs in honor of the two winners.

For more information about the winners, visit www.astudentabove.com.

Jersey Mike’s Subs, with more than 2,500 locations open and under development nationwide, serves authentic fresh sliced/fresh grilled subs on in-store freshly baked bread — the same recipe it started with in 1956. Passion for giving in Jersey Mike’s local communities is reflected in its mission statement “Giving…making a difference in someone’s life.” For more information, please visit jerseymikes.com or follow us on Facebook (facebook.com/jerseymikes), Instagram (instagram.com/jerseymikes), and Twitter (twitter.com/jerseymikes.com).