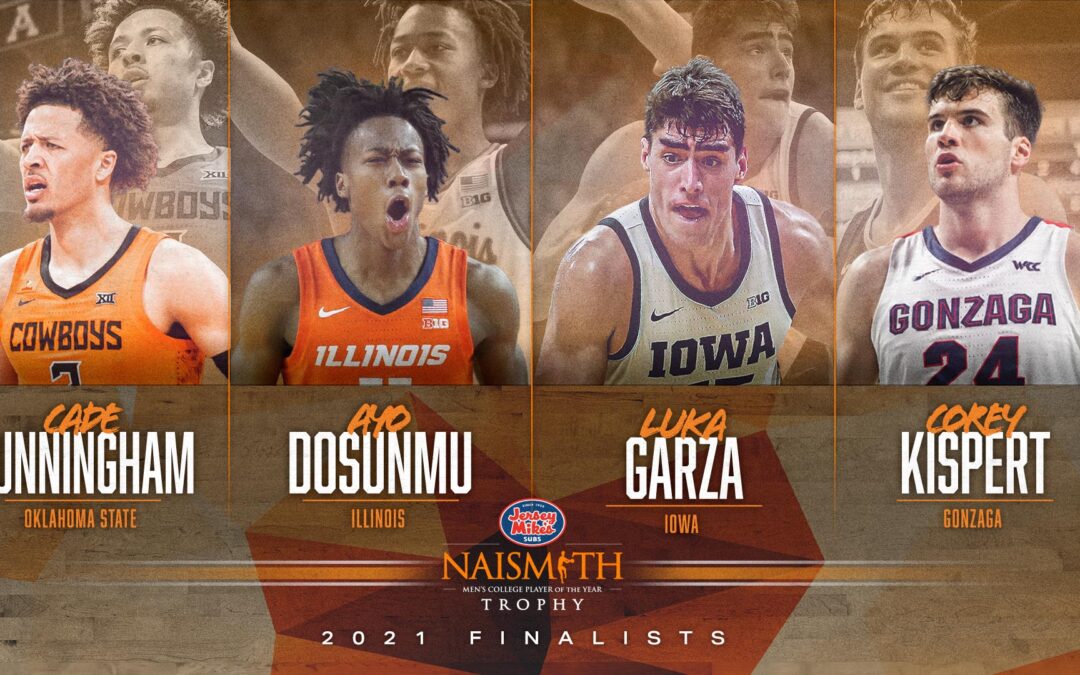 Winner to be Announced Live on CBS Sports Network April 3

ATLANTA (March 19, 2021) – The Atlanta Tipoff Club announced today the four finalists for the 2021 Jersey Mike’s Naismith Trophy, the most prestigious individual honor in college basketball, and they include Oklahoma State’s Cade Cunningham, Illinois’ Ayo Dosunmu, Iowa’s Luka Garza and Gonzaga’s Corey Kispert. While all four finalists look to become their university’s first recipient of the award, two names are familiar to the Naismith Awards—Garza, who was a 2020 finalist for this honor, and Cunningham, who won last year’s Jersey Mike’s Naismith High School Player of the Year Trophy.

The finalists emerged from a group of 10 semifinalists and were selected by the Atlanta Tipoff Club’s national voting academy, comprised of leading journalists from around the country, current and former head coaches, former award winners and conference commissioners, all of whom base their selections on outstanding on-court performances during the 2020-21 college basketball season. The next round of voting runs from March 19-31, with the winner being announced live on CBS Sports Network’s NCAA® March Madness® 360 studio show on April 3.

“Despite the challenges of the pandemic, the level of talent on the court was stellar, as these players emerged as the leading candidates for the Jersey Mike’s Naismith Trophy,” said Eric Oberman, executive director of the Atlanta Tipoff Club. “Their consistency throughout the course of the season and ability to dominate games make them among the game’s top performers, and we look forward to honoring one of them at the end of the season.”

Once again, fans will have a say in who wins the top honor by participating in the Naismith Awards Fan Vote presented by Jersey Mike’s. By visiting naismithfanvote.com from March 19-31, fans will have the opportunity to cast a ballot daily for the Jersey Mike’s Naismith Trophy for the Men’s and Women’s College Player of the Year and the Werner Ladder Naismith Coach of the Year awards. There will also be opportunities to vote on the @NaismithTrophy and NCAA @MarchMadness Twitter pages. The fan vote will account for five percent of the overall vote, which will be tabulated and certified by Aprio, a premier CPA-led business advisory firm, headquartered in Atlanta.

The winner will be presented with the Jersey Mike’s Naismith Trophy, which is produced and provided by Herff Jones, leading provider of graduation and educational products and services designed to inspire achievement and create memorable experiences for students. A replica trophy will be donated by Herff Jones to the winner’s university.