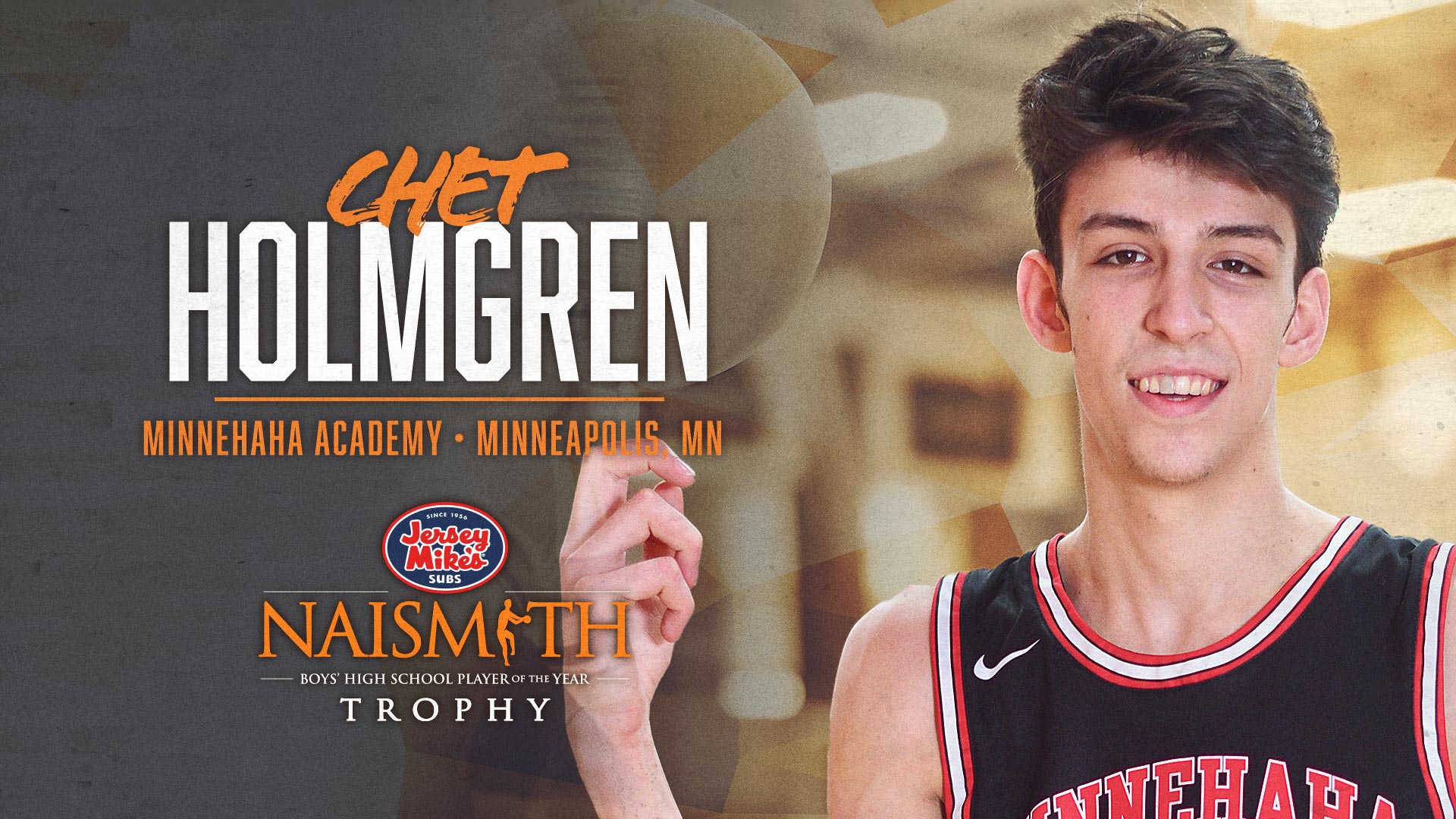 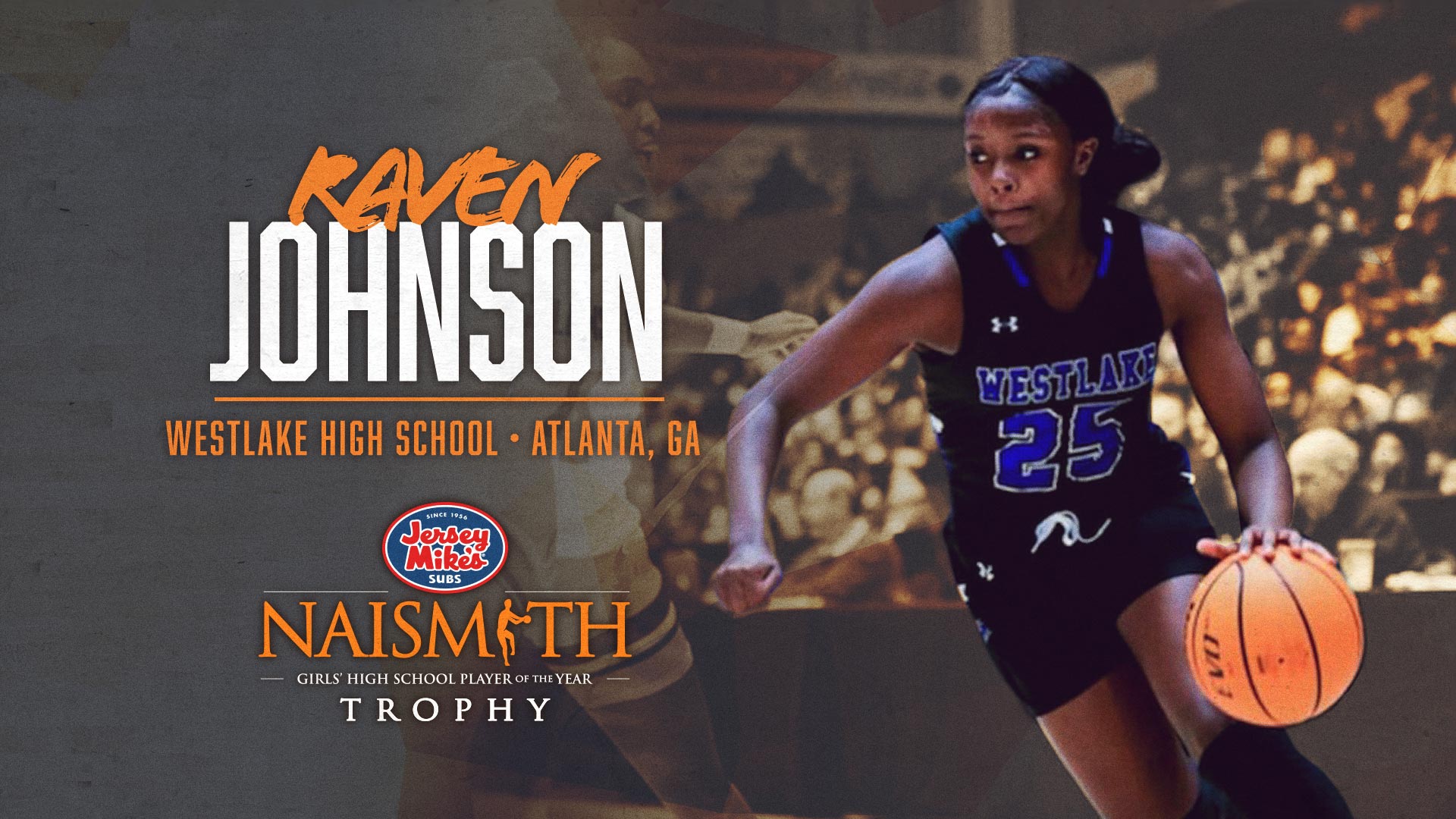 ATLANTA (March 11, 2021) – Last night, the Atlanta Tipoff Club awarded the 2021 Jersey Mike’s Naismith High School Trophy for Boys Player of the Year to Chet Holmgren, a senior at Minnehaha Academy in Minneapolis. Today, the Atlanta Tipoff Club announced senior Raven Johnson of Westlake High School in Atlanta as the 2021 Jersey Mike’s Naismith High School Trophy Girls Player of the Year. Johnson will be honored later this year with a ceremony at her high school.

“Overcoming the challenges of playing a season during a pandemic, Raven and Chet were the most outstanding players in the nation and incredibly deserving to be honored with the Jersey Mike’s Naismith High School Trophy as Players of the Year,” said Eric Oberman, executive director of the Atlanta Tipoff Club. “We are proud to have them join our list of student athletes who have won this honor and look forward to watching them play throughout their careers.”

At his game against previously undefeated Minneapolis North, Holmgren led his team to victory with a triple-double (22 points, 12 blocks and 11 rebounds). While his season is still in progress, he has been averaging 20.6 points per game, earning double digits in every showing. The 7-foot senior center helped lead Minnehaha Academy to a 13-1 season, and he becomes the first winner of the Jersey Mike’s Naismith High School Trophy from Minnehaha Academy and the state of Minnesota. Holmgren is considering continuing his playing career in college at one of the many schools he received offers from, including Gonzaga, Georgetown, Minnesota, Michigan, Memphis, North Carolina and Ohio State.

“This is a tremendous honor, and I’m so appreciative to win the Jersey Mike’s Naismith Trophy,” said Holmgren. “I’d like to thank my family, teammates and coaches for helping me to achieve success, and I also want to thank the Atlanta Tipoff Club and Jersey Mike’s for recognizing me.”

Johnson, a 5-foot-8 guard, has averaged 15.3 points and 5.7 assists per game this season with career totals of 1,623 points and 425 assists in 110 games. Her defensive stats are also impressive with 3.7 steals per game in the 2020-21 season and 409 steals in her career. She has led Westlake High School to the 6AAAA Georgia Championship game, which will be played Friday, March 12, against Carrollton High School. The Lions currently have a 19-0 season and hit a milestone with their 100th consecutive win in the state of Georgia earlier this year. Johnson will become only the second Jersey Mike’s Naismith High School Girls Player of the Year winner to go on to play at the University of South Carolina, joining 2014 winner A’ja Wilson.

“I am so proud to have won the Jersey Mike’s Naismith High School Trophy,” said Johnson. “It means the world to me. I would like to share a quote from Kobe Bryant that I try to live by, ‘Great things come from hard work and perseverance. No excuses.’ I have worked hard to try to become the best player for my team.  Thanks to all who have poured into molding me to be able to receive this award.”

The Jersey Mike’s Naismith High School Trophy for Player of the Year was first presented in 1987, and the winners are selected by a group of basketball journalists from around the country who form the Naismith Awards national high school voting academy. The selections were based on outstanding performances during the 2020-21 high school basketball season.

“On behalf of Jersey Mike’s and our franchise owners throughout the country, we congratulate Raven and Chet for being selected as the winner of this year’s Jersey Mike’s Naismith High School Trophy,” said Rich Hope, chief marketing officer, Jersey Mike’s Franchise Systems, Inc.  “Their commitment to excellence was on full display this season and their schools and local communities should be very proud.”