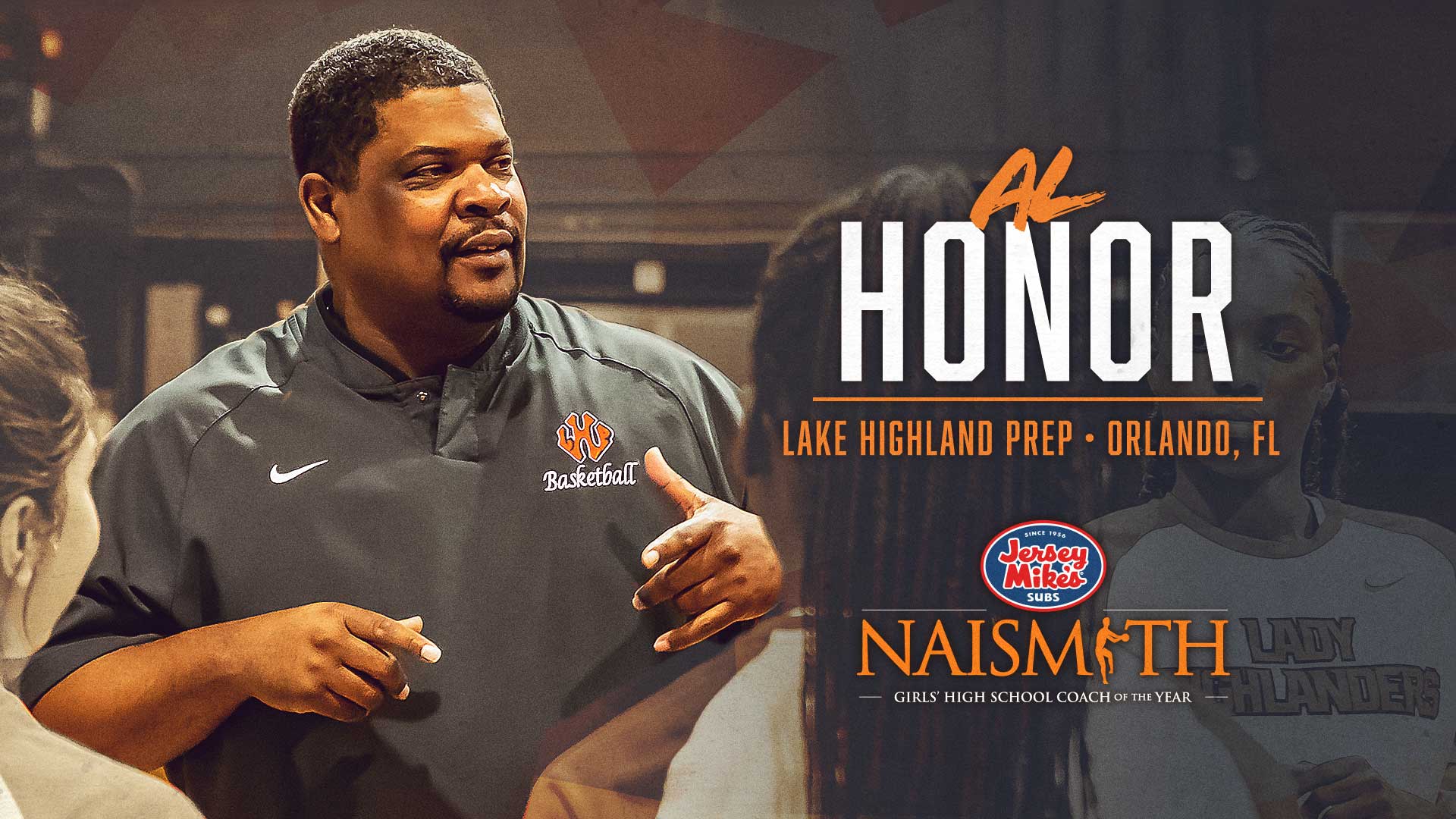 “Al and Luke have coached their teams to great success this season and have served as leaders and mentors to their players despite the unique challenges brought on by the pandemic,” said Eric Oberman, executive director of the Atlanta Tipoff Club. “Through strong leadership and steady guidance, they have displayed the qualities of a Jersey Mike’s Naismith Coach of the Year Award winner, leaving a lasting positive impact on their players and in their communities.”

Honor has served as the head girls basketball coach at Lake Highland Prep since 2011. The Highlanders just completed a second back-to-back state championship title, making this the second time they have won back-to-back state championships (2014 & 2015). Going undefeated this season (19-0) and extending a 35-game winning streak, Honor’s leadership has earned the No. 1 ranked Highlanders an invitation to the GEICO High School Nationals, scheduled to be held April 1-3 in Fort Myers, Florida.

“Winning the Jersey Mike’s Naismith High School Coach of the Year is a huge honor that I proudly accept for my hardworking players, my awesome assistant coaches, Kamari Smith and Rose Temple, and really supportive AD,” said Honor. “It means a great deal to be selected amongst so many outstanding coaches who lead unselfishly every day. I thank God to be able to participate in a sport under such trying times and give people some sense of normalcy that we are striving to get back to in the near future. Thank you to Jersey Mike’s and the Atlanta Tipoff Club Naismith Award Selection Committee for noticing a coach being a shepherd behind a great group of young women.”

In his sixth year as head coach at Sunrise Christian Academy, Barnwell led his team to an 18-2 season. The Buffaloes recorded wins over top-ranked Montverde Academy and No. 2 IMG Academy. Barnwell coached Sunrise to its first appearance in the GEICO High School Nationals. Later this week, he will take his team to the NIBC Championship, where the Buffaloes are projected to receive an invite to the GEICO High School Nationals for the third consecutive season.

“I am completely humbled by the honor of the Jersey Mike’s Naismith High School Coach of the Year,” said Barnwell. “The heart of basketball was for Dr. Naismith to disciple young men, and I am blessed God allows me to continue the same work many years later. I share this award with an amazing staff of coaches and players.”

“On behalf of Jersey Mike’s and our franchise owners across the country, we congratulate Al and Luke on their selection as the recipients of this year’s Jersey Mike’s Naismith High School Coach of the Year Awards,” said Rich Hope, chief marketing officer, Jersey Mike’s Franchise Systems, Inc. “Both coaches showed tremendous leadership and a commitment to excellence and should be proud of their accomplishments and this recognition.”

First presented in 2008, the Jersey Mike’s Naismith High School Coach of the Year is voted on by a select group of basketball journalists from around the country who form the Naismith Awards national high school voting academy. The selections are based on outstanding coaching performances during the 2020-21 high school basketball season.