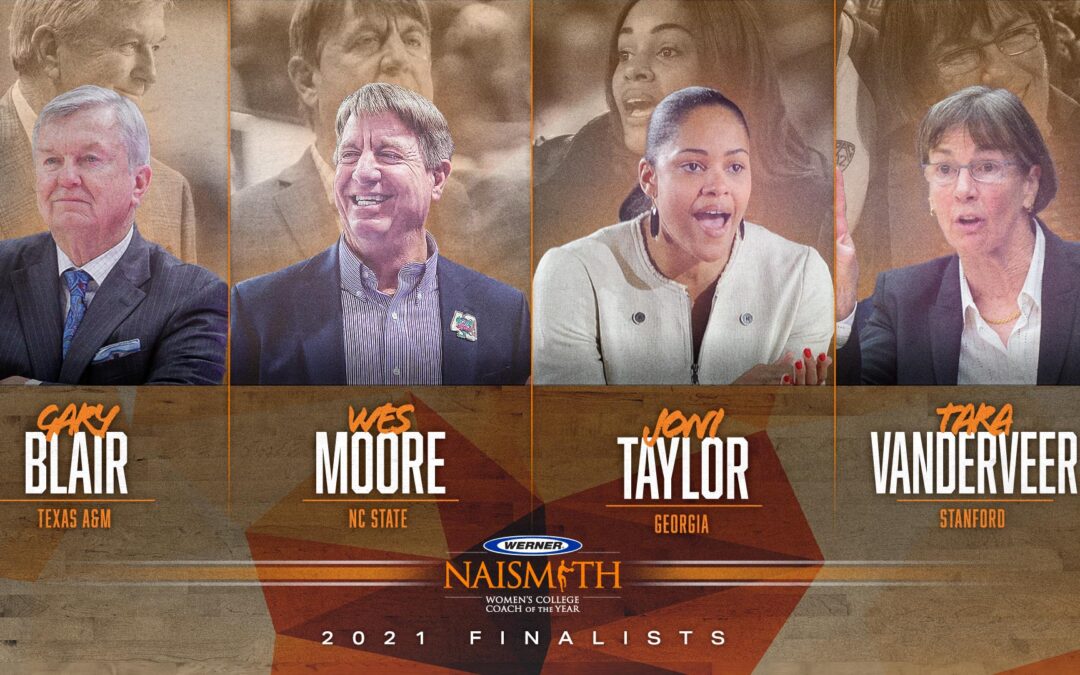 ATLANTA (March 16, 2021) – The Atlanta Tipoff Club today announced the four finalists for the 2021 Werner Ladder Naismith Women’s Coach of the Year Awards, and the quartet features three seeking their first honor and a two-time honoree. Texas A&M’s Gary Blair, NC State’s Wes Moore and Joni Taylor from Georgia all seek to add their names to the Naismith Awards family, while Stanford’s Tara VanDerveer looks to claim her third such honor after winning it in 2011 and 1990.

The finalists emerged from a group of 10 semifinalists and were selected by the Atlanta Tipoff Club’s national voting academy, comprised of leading journalists from around the country, current and former head coaches, former award winners and conference commissioners, all of whom base their selections on outstanding on-court coaching performances during the 2020-21 regular college basketball season. The next round of voting runs from March 19-31, with the winner being announced live on CBS Sports Network’s NCAA® March Madness® 360 studio show on April 2.

“In a season so challenged by the pandemic, we are all appreciative of what coaches everywhere did to create a safe and healthy environment for their players so that we as fans could enjoy the games, and to watch the wins and accolades grow for these four in particular is simply remarkable,” said Eric Oberman, executive director of the Atlanta Tipoff Club. “With the tournament upon us, the stakes are higher, and the competition to win the Werner Ladder Naismith Coach of the Year award will be just as intriguing.”

Once again fans will have a say in who wins the top coaching honor by participating in the Naismith Awards Fan Vote presented by Jersey Mike’s. By visiting naismithfanvote.com from March 19-31, fans will have the opportunity to cast a ballot daily for the Werner Ladder Naismith Coach of the Year Awards and the Jersey Mike’s Naismith Trophy for the Men’s and Women’s College Player of the Year. There also will be opportunities to vote for your favorite women’s coach on the @NaismithTrophy Twitter page. The fan vote accounts for five percent of the overall vote, which will be tabulated and certified by Aprio, a premier CPA-led business advisory firm, headquartered in Atlanta.

Later this year, the winner will be presented with a Werner Ladder Naismith Coach of the Year commemorative trophy designed by nationally acclaimed sculptor Brian Hanlon. The bronze trophy features Dr. James Naismith, inventor of basketball, holding the original peach basket and ball used to play the first game.

“It is a true honor to be aligned with the Naismith Coach of the Year Award recognizing these legendary coaches and their accomplishments,” said Stacy Gardella, vice president of brand marketing at Werner Co. “Throughout the season, these coaches have overcome challenges both on and off the court, and each is deserving of this special recognition.”

WERNER, a WernerCo brand, is the official ladder of NCAA® March Madness® and the world leader in ladders with a complete line of climbing products designed for working at heights. The portfolio includes ladders, attic ladders, scaffolding, pump jacks, stages, planks, stepstools, accessories and fall protection equipment including harnesses, lanyards, anchors and compliance kits. From ladders to fall protection, Werner provides a full line of climbing equipment that’s engineered to give you maximum safety, durability and productivity at every height. For more information, visit www.wernerladder.com.