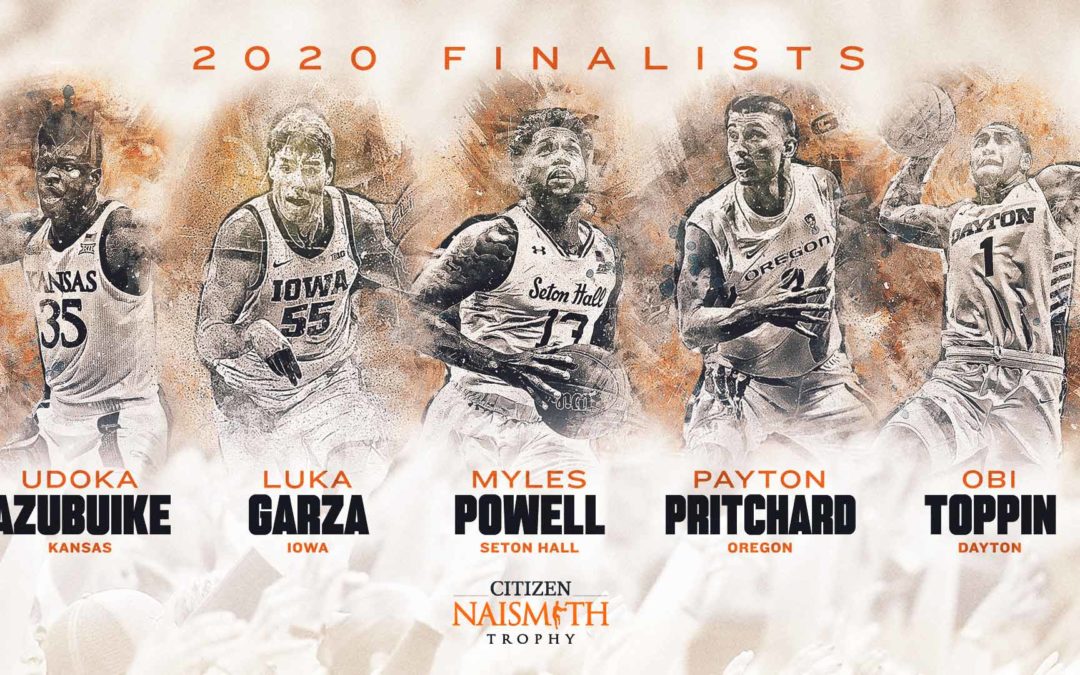 Azubuike, Garza, Powell, Pritchard and Toppin Compete for the Men’s Player of the Year Honor

Four of the finalists—Garza, Powell, Pritchard and Toppin—would be the first from their schools to win the men’s Citizen Naismith Trophy, and Azubuike would be the third player from Kansas to bring home the award, joining former Jayhawks’ winners Danny Manning (1988) and Frank Mason III (2017). If Azubuike, Powell or Pritchard win, they would join Mason and 27 others who won the award in their senior year. Toppin looks to be the 10th sophomore to win the trophy and Garza would become the 12th junior to take home the award.

“Each of these finalists enjoyed an incredible season, and all of them deserve to win the Citizen Naismith Trophy,” said Eric Oberman, executive director of the Atlanta Tipoff Club. “Their talent and skill on the court make them worthy of Player of the Year, and although we won’t see them in postseason play, we believe it is important to still honor their accomplishments.”

By visiting naismithfanvote.com, from March 20-April 1, 2020, fans will be able to cast their ballot for their favorite finalist. Fans may also vote on the @NaismithTrophy Twitter page between March 25-April 1, to select one of the finalists. The fan vote will account for five percent of the overall vote, which will be tabulated and certified by Aprio, a premier CPA-led business advisory firm, headquartered in Atlanta. The 2020 Citizen Naismith Trophy is scheduled to be announced on April 3, 2020, and the winning player will be awarded with the Citizen Naismith Trophy, produced and provided by Herff Jones, leading provider of graduation and educational products and services designed to inspire achievement and create memorable experiences for students. A replica trophy will be donated by Herff Jones to the respective school in recognition of award recipient. The award ceremony will be held on a later date.

“These five student-athletes have shown the commitment and drive this season worthy of the top Player of the Year honor,” said Eric Horowitz, managing director U.S. and travel retail, Citizen Watch Company of America, Inc. “We had the pleasure of watching this elite group of five play this season and look forward to awarding one of them with the Citizen Naismith Trophy.”

The Citizen Naismith Trophy, originally sculpted in 1982 by Atlanta’s Marty C. Dawe, quickly became one of the most prestigious individual national basketball honors. The Atlanta Tipoff Club’s national voting academy, comprised of leading journalists from around the country, current and former head coaches, former award winners and conference commissioners, all of whom base their selections on outstanding on-court performances during the 2019-20 regular college basketball season, will vote for the winner.