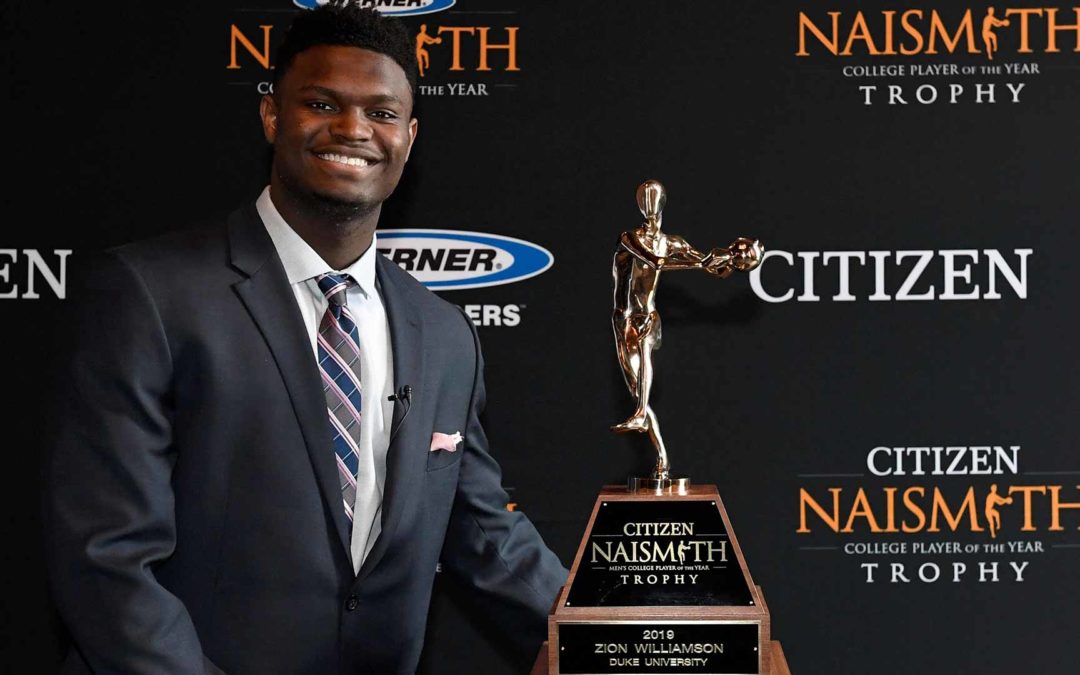 ATLANTA (April 7, 2019) – Duke’s Zion Williamson was named the 2019 Citizen Naismith Trophy winner as college basketball’s most outstanding player, announced today by the Atlanta Tipoff Club. The sensational 6’7” forward from Spartanburg, South Carolina, became just the third men’s player ever to win the award in as a freshman, joining Anthony Davis (Kentucky, 2012) and Kevin Durant (Texas, 2007). Williamson edged out three other finalists: juniors Rui Hachimura (Gonzaga) and Grant Williams (Tennessee) and sophomore Ja Morant (Murray State). The announcement and presentation of the Citizen Naismith Trophy—named after the inventor of basketball, Dr. James Naismith—was made at the Naismith Awards Brunch presented by Mortenson at the Nicollet Island Pavilion in downtown Minneapolis.

“Zion Williamson enjoyed a season for the ages, which led to him winning the Citizen Naismith Trophy, yet he was also the ultimate teammate and helped Duke achieve tremendous success this season,” said Eric Oberman, executive director of the Atlanta Tipoff Club. “His passion, enthusiasm and excitement for the game of basketball typifies the attributes of this award as displayed by the 50 winners before him. We are thrilled to call Zion a Citizen Naismith Trophy winner and look forward to following his career as it progresses.”

Williamson was named both the Atlantic Coast Conference (ACC) Player of the Year and Rookie of the Year this season, becoming the third player in ACC history to sweep the two individual awards.

“I want to thank the Citizen Naismith Trophy committee for selecting me as the Player of the Year. It is truly an honor to receive this and join such an elite list of former Blue Devils to have also won the award,” said Williamson. “There were so many great players who could have won this award this year. I can’t thank my teammates, coaches and family enough for helping me. This is a team award, and it’s an honor for me to accept this on behalf of my brothers.”

Additionally, Williamson was selected to the All-ACC first team and All-ACC Defensive team. He led the ACC in steals (2.21) and ranked fourth in the conference in blocked shots with 1.85 bpg.  He was second in the conference in scoring (21.6 ppg) and third in rebounding (8.8 rpg). The Blue Devils (32-6) were the No. 1 overall seed in the NCAA Tournament and went on to the Elite Eight.

“Zion is absolutely deserving of this year’s Citizen Naismith Trophy. He handled himself with such class and humility this season, especially given what he accomplished, both individually and with his team,” said Duke Head Coach Mike Krzyzewski. “Zion is a great representative of the game and is a pleasure to coach. Duke has a long history of Naismith winners, and Zion certainly belongs in that elite company.”

The Citizen Naismith Trophy, originally sculpted in 1982 by Atlanta’s Marty C. Dawe, is one of the most prestigious individual national basketball honors. Williamson was awarded with the Citizen Naismith Trophy, produced and provided by Herff-Jones, the leading provider of graduation and educational products and services, including class rings and jewelry. A replica trophy will be donated by Herff-Jones to Duke in recognition of Williamson.

“Zion Williamson and all of the finalists represent what’s great about the game of basketball, and we congratulate each of them on a remarkable season,” said Eric Horowitz, managing director U.S. and travel retail, Citizen Watch Company of America, Inc. “We are thrilled to award Zion with the Citizen Naismith Trophy and are proud to consider him part of the Naismith Awards family.”

Williamson was chosen by the Atlanta Tipoff Club’s national voting academy, comprised of leading journalists from around the country, current and former head coaches, former award winners and conference commissioners, all of whom base their selections on outstanding on-court performance during the 2018-19 college basketball season. Additionally, fans contributed to five percent of the total vote. The final tally was tabulated and certified by Aprio, a premier, CPA-led business advisory firm.

Founded during the 1956-57 season, the Atlanta Tipoff Club is committed to promoting the game of basketball and recognizing the outstanding accomplishments of those who make the game so exciting. The Atlanta Tipoff Club administers the Naismith Awards, the most prestigious national honors in all of college and high school basketball. Named in honor of Dr. James Naismith, inventor of the game of basketball, the family of Naismith Awards annually recognizes the most outstanding men’s and women’s college and high school basketball players and coaches. Other Naismith Awards are presented to the men’s and women’s college basketball defensive players of the year, as well as lifetime achievement awards to basketball officials and outstanding contributors to the game. UCLA’s Lew Alcindor received the first Citizen Naismith Trophy in 1969, while the late Anne Donovan (Old Dominion) was the inaugural women’s recipient in 1983. Corporate partners of the Naismith Awards include Bona, Citizen Watch Company, Jersey Mike’s and Werner Ladder.