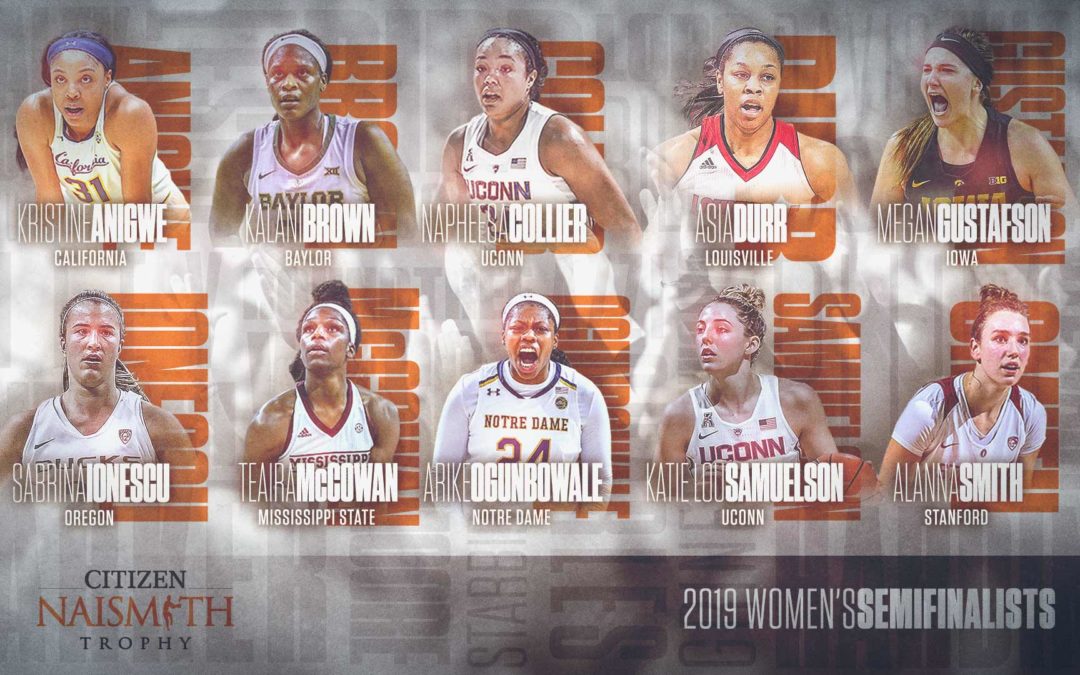 Baylor, whose Brittany Griner won the trophy in 2012 and 2013, and Stanford, whose Katie Starbird won in 1997 and Jennifer Azzi won in 1990, are searching for their third win with Kalani Brown and Alanna Smith, respectively. Meanwhile, UConn, which has won more Citizen Naismith Trophies (10) than any other school on the women’s side, is represented by Napheesa Collier and Katie Lou Samuelson, who won the Jersey Mike’s Naismith High School Trophy in 2015. The semifinalists represent nine schools and six conferences nationally. Out of the 10 players, nine are seniors, and Ionescu is the sole junior included.

“As the regular season comes to a close, we will see the talent and commitment of these semifinalists really shine,” said Eric Oberman, executive director of the Atlanta Tipoff Club. “We look forward to watching them finish the season strong as these players compete for the 2019 Women’s Citizen Naismith Trophy.”

The four finalists will be announced on March 22, 2019, and fans will have a chance to vote for their favorite player of the four beginning that same day through April 3, by visiting naismithtrophy.com/vote to cast their ballot. The fan vote will account for five percent of the overall vote. The 2019 Citizen Naismith Trophy for Women’s Player of the Year will be announced on April 6, 2019. The winner will be honored at her school on a later date.

“While only one player can win the Women’s Citizen Naismith Trophy, each of these semifinalists has shown the passion and drive worthy of the honor thus far,” said Eric Horowitz, managing director U.S. and travel retail, Citizen Watch Company of America, Inc. “We are looking forward to watching them continue to compete for the title of Women’s Player of the Year.”

The four finalists will be chosen by the Atlanta Tipoff Club’s national voting academy, comprised of leading journalists from around the country, current and former head coaches, former award winners and conference commissioners, all of whom base their selections on outstanding on-court performances during the 2018-19 college basketball season. The vote will be tabulated and certified by Aprio, formerly Habif, Arogeti & Wynne, the largest full-service, independent CPA-led business advisory firm, based in Atlanta.