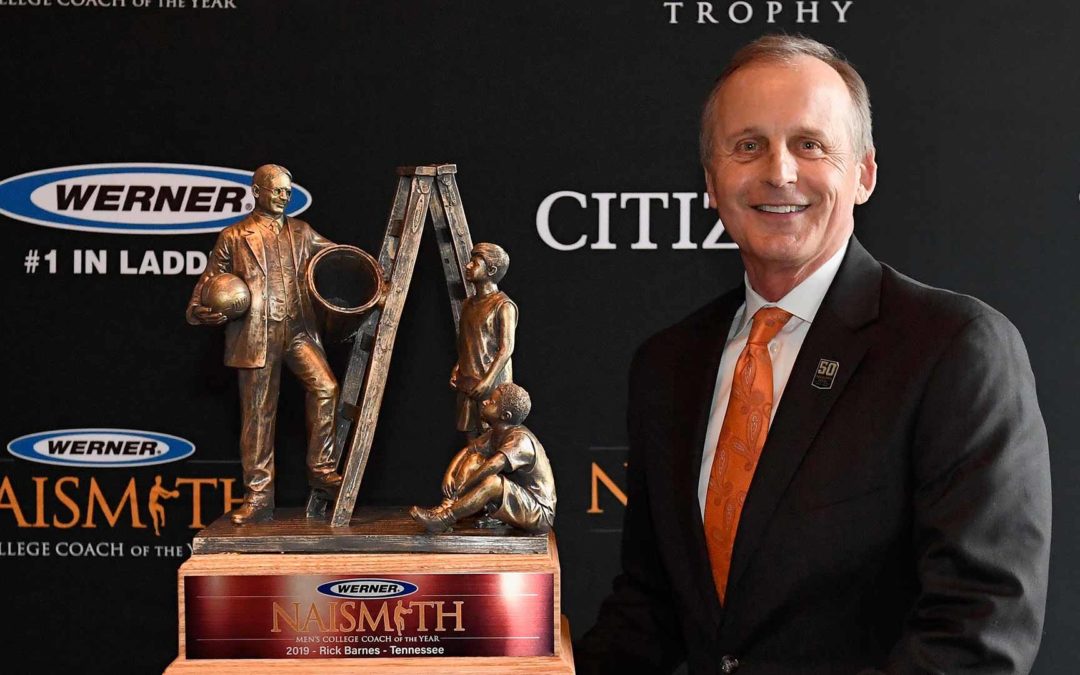 “Rick Barnes has built an incredible program at Tennessee, and his coaching performance this season was worthy of the top award in college basketball, the Werner Ladder Naismith Trophy Men’s Coach of the Year,” said Eric Oberman, executive director of the Atlanta Tipoff Club. “We are honored to recognize Rick as the newest member of the Naismith Awards family.”

Barnes won the top honor edging out the other three finalists Chris Beard (Texas Tech), Tony Bennett (Virginia) and Kelvin Sampson (Houston). He becomes the fifth coach from the Southeastern Conference (SEC) to win the Werner Ladder Naismith Men’s Coach of the Year Award. For the first time in program history, he led the Vols on a 19-game win streak and also directed his team into the top 10 of the Associated Press (AP) Top 25 for the entire regular season, including four weeks where Tennessee was ranked No. 1. In doing so, he became one of six coaches ever to lead multiple schools to a No. 1 AP ranking, joining John Calipari, Frank McGuire, Rick Pitino, Eddie Sutton and Roy Williams. Barnes led his team to the No. 2 seed in the South Region of the NCAA Tournament where the Vols made it to the Sweet 16.

“To say the least, I’m honored. I’m humbled really,” said Barnes. “When you’re able to receive an award like the Werner Ladder Naismith Coach of the Year, you know it goes to your players and your assistant coaches.”

During the Naismith Awards Brunch at the Final Four in Minneapolis, Barnes was presented with the Werner Ladder Naismith Coach of the Year commemorative trophy designed by nationally acclaimed sculptor Brian Hanlon. The bronze trophy features Dr. James Naismith, inventor of basketball, holding the original peach basket and ball used to play the first game.

“Rick Barnes and his fellow finalists have led their teams to great seasons, and each of them has impacted the sport of basketball through their coaching and strong leadership,” said Stacy Gardella, vice president of brand marketing at WernerCo. “We are excited to honor Rick as the Werner Ladder Naismith Men’s College Coach of the Year for his dedication to his team and college basketball.”

Barnes was chosen by the Atlanta Tipoff Club’s national voting academy, comprised of leading journalists from around the country, current and former head coaches, former award winners and conference commissioners, all of whom base their selections on outstanding coaching performances during the 2018-19 college basketball season. Additionally, fans contributed to five percent of the total vote. The final tally was tabulated and certified by Aprio, a premier, CPA-led business advisory firm.