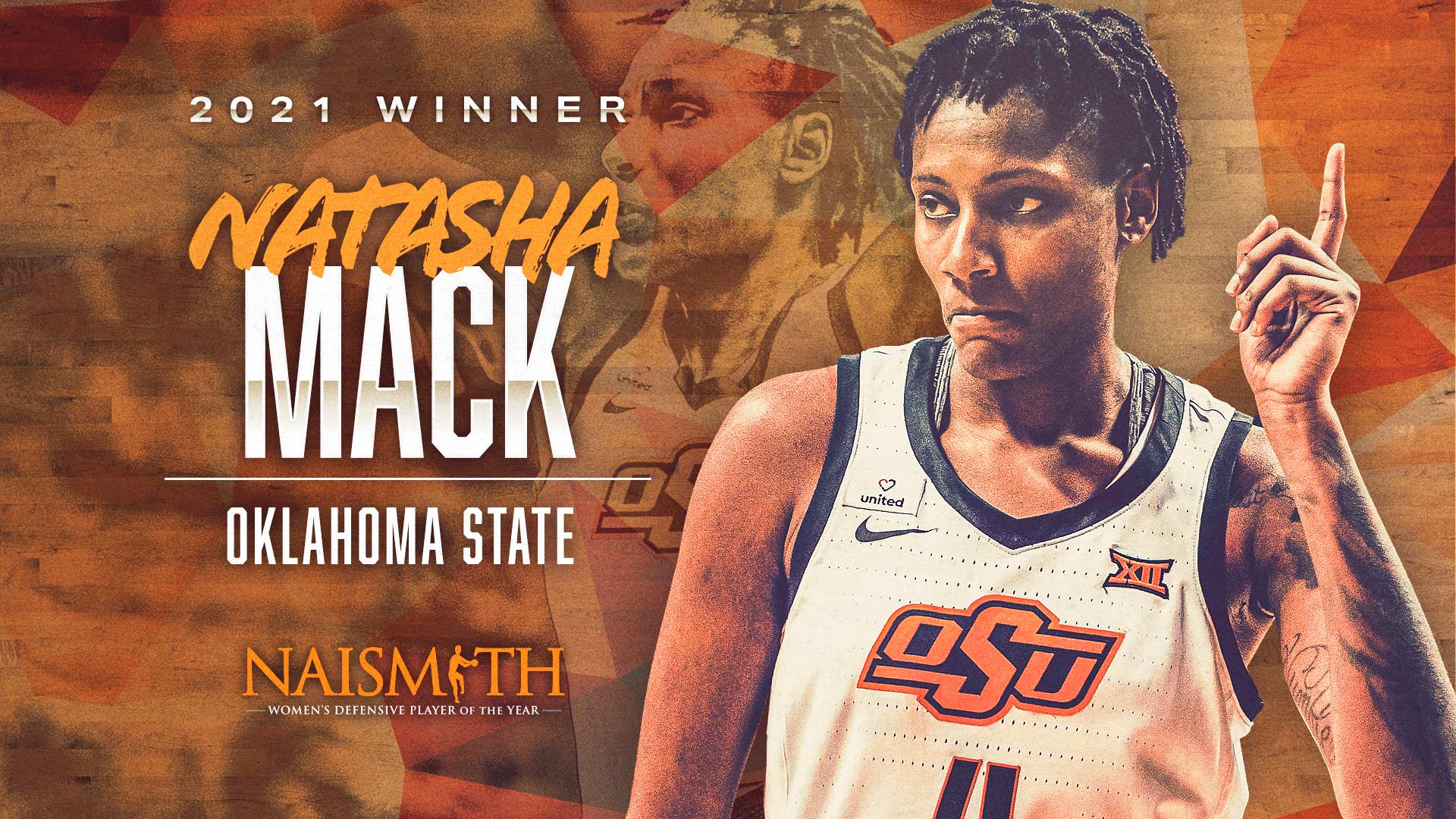 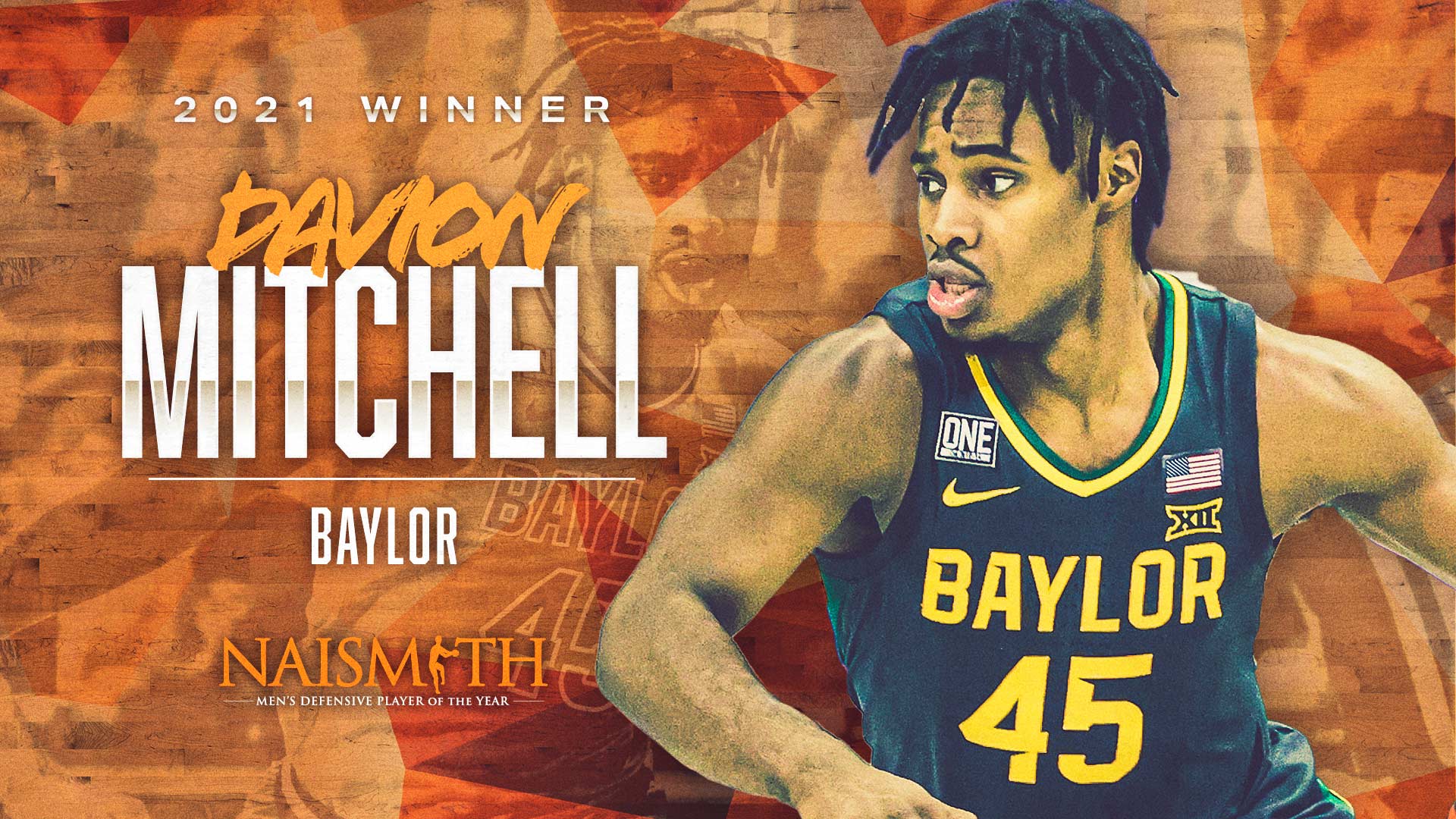 ATLANTA (April 2, 2021) – For the second year in a row, the Big 12 Conference swept the Naismith Women’s and Men’s Defensive Player of the Year Awards, as Oklahoma State senior Natasha Mack and Baylor junior Davion Mitchell were named as the winners as announced by the Atlanta Tipoff Club today. Mack and Mitchell follow Kansas’ Marcus Garrett and Baylor’s Didi Richards, who won in two, and this marks the third consecutive year that a conference has swept the Naismith Defensive Player of the Year awards, with the Pac-12 owning 2019 (Kristine Anigwe, California, and Matisse Thybulle, Washington).

Mack was announced by college basketball broadcaster and Atlanta Tipoff Club executive committee member Debbie Antonelli, while Mitchell’s win was revealed by Marcus Camby, who won the Jersey Mike’s Naismith Trophy for Player of the Year 25 years ago while playing for UMass.  Camby was named the NBA’s Defensive Player of the Year for the 2006-07 season. Both were announced live on CBS Sports HQ earlier today.

“Natasha and Davion were widely recognized nationally for their tenacity on the defensive end of the court, often times taking over games to propel their teams to victory,” said Eric Oberman, executive director of the Atlanta Tipoff Club. “We are proud to add them to our growing list of defense-minded players as Naismith Award winners.”

Mack edged out three other finalists for the women’s award, including Aliyah Boston (South Carolina), Veronica Burton (Northwestern) and Aari McDonald (Arizona). Unanimously named to the Big 12 All-Defensive Team, Mack also earned the Big 12 Women’s Basketball Defensive Player of the Year honor. The 6’4” forward leads the country with 112 blocked shots and tallied 56 steals for the season. Averaging 8.9 defensive rebounds and 19.8 points per game, Mack showcased her skill on both ends of the court this season.

“I am honored to be named the Naismith Defensive Player of the Year! It means a lot to me to see the amount of blood, sweat and tears I put into this game being rewarded,” said Mack. “I couldn’t have done this without my amazing support group who has helped me keep my head high and my mind focused. I just want to thank everyone who has believed in me and has helped me on my journey.”

In the four-year history of the Naismith Defensive Men’s Player of the Year Award, Mitchell is the third player from the Big 12 to win the honor, joining 2018 and 2020 honorees West Virginia’s Jevon Carter and Kansas’ Marcus Garrett. He also becomes the first player from Baylor to win any men’s Naismith Award. For the second straight season, Mitchell was named to the Big 12 All-Defensive Team, and the Baylor junior was also named 2021 Big 12 Defensive Player of the Year, the first in program history. The 6’2” guard is second in steals per game with 2.0 and assist-to-turnover ratio (2.3). Mitchell averaged 14.1 points and 2.6 rebounds per game this season. Moreover, he and the Bears will be playing in the NCAA Final Four on Saturday, April 3. The other finalists for the Naismith Men’s Defensive Player of the Year included Herbert Jones (Alabama), Evan Mobley (USC) and Neemias Queta (Utah State).

“Winning the Naismith Defensive Player of the Year is a huge honor, and I’m thankful to the committee for picking me out of so many great defenders,” said Mitchell. “There are countless people who have helped me work on my game over the years, and I’m so happy for all of them that they’re being rewarded for all of the time they’ve invested. My family, my coaches, all of my teammates and the grad assistants who have lived with me in the gym, they all played a part in this award. I thank God every day for this opportunity to play the game I love, and I can’t wait to get back out there and compete for a national championship with my teammates.”

The Atlanta Tipoff Club’s board of selectors, comprised of leading media members from around the country, selected the winners, basing their selections on outstanding on-court defensive performances during the 2020-21 college basketball season.