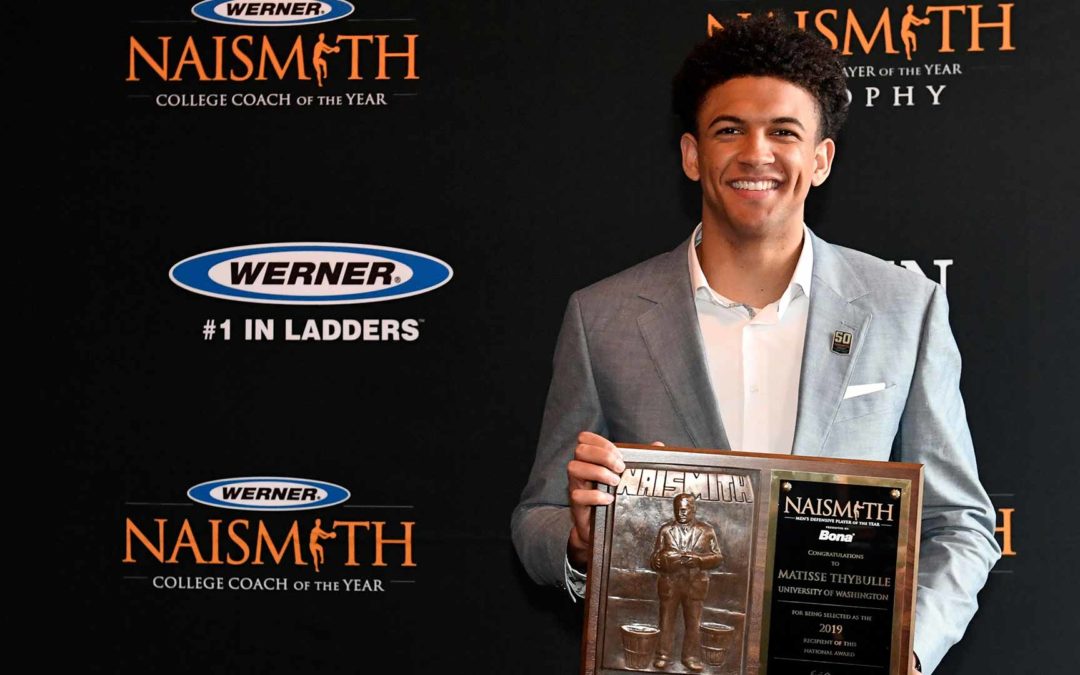 Pac-12 Seniors Become Only the Second Honorees of the Award

ATLANTA (April 7, 2019) – The winners of the 2019 Naismith Defensive Player of the Year Award presented by Bona for men’s and women’s basketball both hail from the Pac-12 Conference as Matisse Thybulle (Washington) and Kristine Anigwe (California), respectively, claim top honors in the second year of this award. The winners were announced today by the Atlanta Tipoff Club, as Thybulle was honored at the Naismith Awards Brunch presented by Mortenson, edging out the other finalists, Brandon Clarke (Gonzaga), De’Andre Hunter (Virginia) and Zion Williamson (Duke). Anigwe will be honored at her school at a later date. She takes home the win over fellow finalists, Lauren Cox (Baylor), Ae’Rianna Harris (Purdue) and last year’s winner, Teaira McCowan (Mississippi State).

“Matisse Thybulle, Kristine Anigwe and all of the award finalists have shown the full extent of their defensive talents on the court,” said Eric Oberman, executive director of the Atlanta Tipoff Club. “As the second winners of the Naismith Defensive Player of the Year Awards, they are building the legacy and setting the bar high for future contenders. We are excited to honor Matisse and Kristine for their passion and dedication to protecting the paint.”

Thybulle was just the second player in Pacific-12 Conference (Pac-12) history to be honored as the conference Defensive Player of the Year two years in a row. The senior guard ended his season with 126 steals and notched a team-high 83 blocks, making him the only player in the last 20 seasons to record both 100 steals and 80 blocks in the same year. He is one of just three players to average 2.0 bpg and 2.0 spg in a season, leading the Huskies to the Second Round of the NCAA Tournament.

“To win the Naismith Defensive Player of the Year award means the world to me. I’ve put in the hard work day in and day out, and I have to credit my teammates because they have always had my back both on and off the court. I was only able to accomplish this because of them,” said Thybulle. “Defense is exciting, and I believe we showed people that this year. I’m just happy to represent this program on this stage because there are big things coming for the Huskies.”

“What an incredible honor for Matisse and so well deserved. I’m so glad the Naismith Defensive Player of the Year award exists now because it really recognizes the effort that goes into the sport,” said Washington Head Coach Mike Hopkins. “Defense is 50 percent of the game and what Matisse has done over his career is unlike anything I’ve ever seen in my 24 years of coaching.”

Anigwe was named Pac-12 Defensive Player of the Year this season. She ended her season with an average of 22.5 ppg and a total of 57 blocks, and she was the top rebounder in the nation with an average of 16.3 rpg. The California senior has a streak of 33 consecutive games with double-doubles, including her last game of the regular season where she had a 32-point, 30-rebound performance. Anigwe led her team to the Second Round of the NCAA Tournament.

“I’m truly honored to receive this award. There are so many great players who have had amazing seasons, and it’s humbling to be in that group,” said Anigwe. “I’m so grateful for everyone who has been in my corner these four years—my family, friends, teammates, coaches, staff, and more. I love this program and the people in it for everything they have done for me and I am honored to represent it with this award.”

“I could not be more proud of and excited for Kristine. To be named the national Naismith Defensive Player of the Year is such an incredible honor and is so significant to be at the top of the game in what was one of the best years in women’s college basketball history,” said California Head Coach Lindsay Gottlieb. “I think Kristine is truly deserving of this award. She got every defensive rebound out there, she blocked and altered shots, and maybe what people don’t see quite as obviously, she lets us run any defensive scheme with her ability to guard guards or handle bigs one-on-one in the post.”

The winners were chosen by the Atlanta Tipoff Club’s board of selectors, comprised of leading journalists from around the country, who based their selections on outstanding on-court defensive performances during the 2018-19 college basketball season.

“Matisse and Kristine represented true on-court tenacity and dedication to defense this season as well as throughout their college careers,” said Tiffany Baird, brand manager, Bona US. “We congratulate them both on taking home the honor of Naismith Defensive Player of the Year.”

Bona is an innovative, environmentally-conscious company dedicated to creating beautiful floors since 1919. Bona US, the North American subsidiary of BonaAB in Malmö, Sweden, manufactures and distributes floor care and home cleaning products. For decades, most professional and collegiate athletes have played on floors finished with Bona Sport® waterborne finishes, sealers and paints. Bona provides the most complete system of sport products in the industry including waterborne and oil modified finishes, paint, machines, abrasives, adhesives and a fast, effective maintenance system.  From residue-free hardwood floor cleaners to a beautiful array of stains and high durability finishes, consumers, distributors and contractors trust Bona. For more information, please contact Bona US at (800) 872-5515 or www.bona.com.