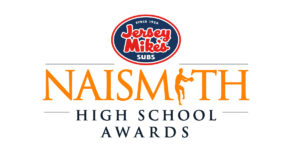 The Jersey Mike’s Naismith High School Trophy, presented annually since 1987 to the most outstanding boys’ and girls’ high school basketball player nationwide, will focus on those in contention for the award, with announcements to emphasize player movement, specifically the 50-player watch list, a midseason team of 25, the 10 national semifinalists, five finalists and the winner. Created in 2008, the Jersey Mike’s Naismith High School Coach of the Year Award will honor the best boys’ and girls’ coaches with announcements to recognize five finalists as well as the winner of each award. The Jersey Mike’s National High School All-America Teams consist of five boys’ and girls’ players on each of the first, second and third teams, then 15 additional honorable mentions.

“Jersey Mike’s has a long-standing tradition of high quality and dedication to excellence, which mirrors the attributes of the Naismith Awards, and we couldn’t be more pleased with this partnership,” said Eric Oberman, executive director of the Atlanta Tipoff Club. “We’re so proud of our high school Naismith Awards and all our former winners, and with the support of Jersey Mike’s, we can continue to activate in ways that further grow the prestige and heritage of these national honors.”

The amplification of this program and much of the in-season activations will be realized by both parties through social media and extensive marketing activation within High Schools nationwide.

Founded during the 1956-57 season, the Atlanta Tipoff Club is committed to promoting the game of basketball and recognizing the outstanding accomplishments of those who make the game so exciting. The Atlanta Tipoff Club administers the Naismith Awards, the most prestigious national honors in all of college and high school basketball. Named in honor of Dr. James Naismith, inventor of the game of basketball, the family of Naismith Awards annually recognizes the most outstanding men’s and women’s college and high school basketball players and coaches. Other Naismith Awards are presented to the men’s and women’s college basketball defensive players of the year, as well as lifetime achievement awards to basketball officials and outstanding contributors to the game. UCLA’s Lew Alcindor received the first Citizen Naismith Trophy in 1969, while the late Anne Donovan (Old Dominion) was the inaugural women’s recipient in 1983.  Corporate partners of the Naismith Awards include the Bona, Citizen Watch Company, Jersey Mike’s and Werner Ladder.

Jersey Mike’s, a fast-casual sub sandwich franchise with more than 2,000 locations open and under development nationwide, believes that making a sub sandwich and making a difference can be one and the same.  Jersey Mike’s offers A Sub Above®, serving authentic fresh sliced subs on freshly baked bread – the same recipe it started with in 1956 – and is passionate about giving back to its local communities.