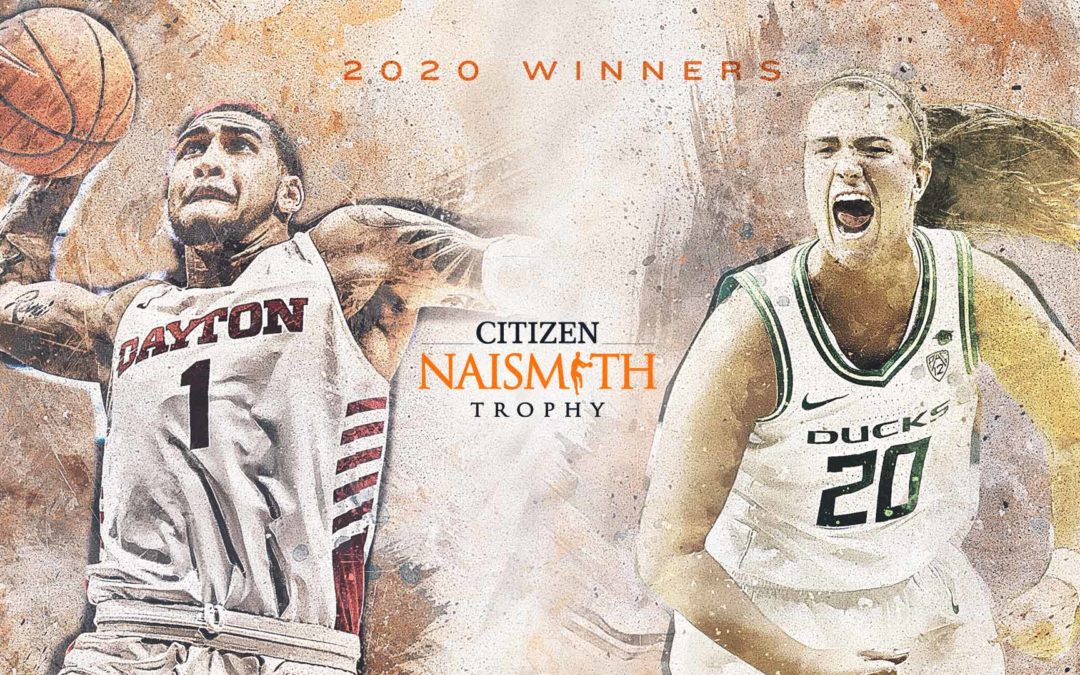 ATLANTA (April 3, 2020) – Oregon senior Sabrina Ionescu and Dayton sophomore Obi Toppin were named winners of the 2020 Citizen Naismith Trophy, presented annually to college basketball’s most outstanding players, the Atlanta Tipoff Club announced. The winners were announced today live on CBS Sports HQ, and both winners will be honored with a ceremony at a later date.

“We saw great on-court performances by Sabrina and Obi throughout the regular season, displaying the talent and commitment worthy of the 2020 Citizen Naismith Trophy,” said Eric Oberman, executive director of the Atlanta Tipoff Club. “While their seasons ended earlier than we all would have hoped, we want to reward the skill and determination Sabrina and Obi had on the court, honoring them as the Women’s and Men’s Player of the Year winners.”

Ionescu, who was a 2019 finalist for the award, is the first Duck to win the award, and the Pac-12’s eighth all-time. Washington’s Kelsey Plum (2017) was the conference’s most recent recipient. For the third-consecutive season, Ionescu was named Pac-12 Women’s Player of the Year and led her team to a Pac-12 Tournament championship title for the second time in three years. She made history as the first Division I men’s or women’s player to record 2,562 points, 1,040 rebounds and 1,091 assists in her career. Her 26-career triple-doubles set the Division I record for both women’s and men’s players, and she also set the Division I record for single-season triple-doubles with eight. Ionescu led the nation with 9.1 assists per game, in leading the Ducks to a 31-2 record this season (17-1 in the Pac-12). Last year, Iowa’s Megan Gustafson claimed the honor in her senior year. Ionescu is the fifth consecutive senior to win the women’s award, and 24th overall, since the Citizen Naismith Trophy was first presented to the late Anne Donovan (Old Dominion) in 1983.

“It’s an honor to be able to receive the Naismith Trophy,” said Ionescu. “I’m humbled and grateful to receive such a prestigious award, and I couldn’t have done it without my teammates and coaches. Being able to play the game I love with people that I love has been nothing short of amazing.”

Toppin, who was named the 2019 Atlantic 10 Rookie of the Year, broke out during his sophomore season, averaging 20.0 points and 7.5 rebounds per game while shooting 63.3% from the field and 39.0% from 3-point range. He became the first Flyer to be named the Atlantic 10 Conference Player of the Year and is the first Dayton player to claim the Citizen Naismith Trophy. It has been 16 years since an Atlantic 10 player won the Citizen Naismith Trophy (St. Joseph’s Jameer Nelson in 2004), and prior to that, Marcus Camby (UMass) was the only other Atlantic 10 player to win the award in 1996. Nelson’s win in 2004 also marked the most recent sweep of the Naismith player and coaching awards when he won with his coach Phil Martelli. Toppin’s win of the Citizen Naismith Trophy and Anthony Grant’s win of the Werner Ladder Naismith Coach of the Year make Dayton the sixth school to win both honors. At 6’9”, Toppin recorded 107 dunks and 234 rebounds this season. He led Dayton to a perfect conference season going 18-0 in the Atlantic 10 and 29-2 overall. Toppin becomes the 10th sophomore to win the Citizen Naismith Trophy for Men’s Player of the Year and first since Michigan’s Trey Burke in 2013. The award has been presented to 28 seniors, 11 juniors and three freshmen, including last year’s winner, Zion Williamson from Duke.

“The Naismith Trophy is an amazing honor. When you look at the other finalists, they are all great players who had great seasons, so you have to give them congratulations for that. I definitely want to thank the Atlanta Tipoff Club, everyone on the committee and everyone who voted for me,” said Toppin. “I also have to thank my teammates and my coaches. Without them pushing me every day, I would not be the person and player I am today. I also want to thank my mom and my family. Their love and support has always been there for me, and mine has been there for them. Finally, I’m very happy and proud to represent the University of Dayton with this great award.”

Ionescu and Toppin were chosen by the Atlanta Tipoff Club’s national voting academy, comprised of leading media members from around the country, current and former head coaches, former award winners and conference commissioners, all of whom based their selections on outstanding on-court performances during the 2019-20 regular college basketball season. In addition, fans had the opportunity to cast a ballot through www.naismithfanvote.com and on Twitter @NaismithTrophy. The Naismith fan vote accounted for 5% of the overall vote. The vote was tabulated and certified by Aprio, a premier, CPA-led business advisory firm, headquartered in Atlanta.

“Though the 2019-2020 season was cut short, both Toppin and Ionescu undeniably deserve the Citizen Naismith Trophy,” said Eric Horowitz, managing director U.S., Citizen Watch Company of America, Inc. “These two extraordinary athletes exemplify everything the Citizen Naismith Trophy represents with their steadfast passion, dedication and unrivaled talent. We congratulate Sabrina and Obi for their dedication and drive.”

The Citizen Naismith Trophy, originally sculpted in 1982 by Atlanta’s Marty C. Dawe, is considered the most prestigious individual national basketball honor. The Citizen Naismith Trophy is produced and provided by Herff Jones, leading provider of graduation and educational products and services designed to inspire achievement and create memorable experiences for students. A replica trophy will be donated by Herff Jones to the University of Oregon and University of Dayton in recognition of Ionescu and Toppin, respectively.