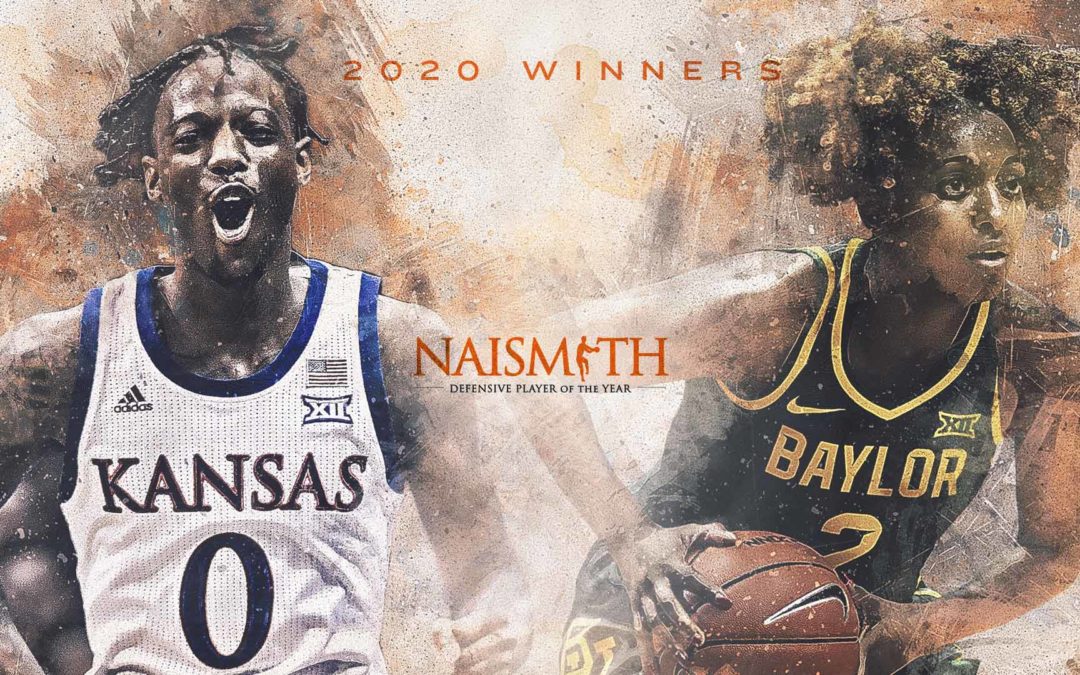 ATLANTA (April 1, 2020) – Today, the Atlanta Tipoff Club has announced for the second year in a row the winners of the Naismith Women’s and Men’s Defensive Player of the Year Awards, juniors DiDi Richards (Baylor) and Marcus Garrett (Kansas), hail from the same conference—the Big 12. In 2019, the winners, Washington’s Matisse Thybulle and California’s Kristen Anigwe, both represented the Pac-12.

“DiDi and Marcus were remarkable players this season and widely praised for their tremendous defensive tenacity,” said Eric Oberman, executive director of the Atlanta Tipoff Club. “These two remarkable student-athletes join a growing list of defense-minded players whom we call Naismith Defensive Player of the Year winners.”

Richards edged out three other finalists for the women’s award, including Aliyah Boston (South Carolina), Aari McDonald (Arizona), and Kylee Shook (Louisville). Named to the Big 12 All-Defensive team and the All-Big 12 Second Team, Richards also earned the Big 12 Women’s Basketball Defensive Player of the Year honor, making her win the ninth for Baylor. The 6’1” guard averaged 8.2 ppg and 4.9 rpg with 170 assists and 52 steals for the season. Her 3.02 assist-to-turnover ratio was fourth best in the nation.

“I would like to start by thanking God, I wouldn’t be here playing this beautiful sport without Him. Thank you to the Naismith committee for selecting me, and I would like to thank my family that has believed in me from day one,” said Richards. “Defense is the first thing I learned in the game. Growing up, my dad took me to my elementary parking lot and made me ‘beat him to the spot.’ All I wanted to do was shoot the ball, but we relentlessly did drills while he yelled ‘Defense wins championships!’ I guess he was right. Hard work does truly pay off.”

The finalists for the Naismith Men’s Defensive Player of the Year included Ashton Hagans (Kentucky), Tre Jones (Duke) and Mark Vital (Baylor). For the second straight season, Garrett was a unanimous selection on the Big 12 All-Defensive team, and the Kansas junior was also named 2020 Big 12 Defensive Player of the Year. The 6’5” guard led his conference in assists (4.6) and assist-to-turnover ratio (2.7). Garrett averaged 9.2 points, 4.5 rebounds, 1.8 steals and 4.5 deflections per game this season, including 6.9 deflections in his last nine outings for top-ranked Kansas. In the three-year history of the Naismith Defensive Player of the Year Award, Garrett is the second player from the Big 12 to win the honor, joining 2018 honoree Jevon Carter (West Virginia).

“First, I would like to thank God. I would also like to thank my coaches and teammates because these awards are won as a team, not individually. I’d also like to thank the Naismith Awards voters,” said Garrett. “We had a great season as did the other finalists who were also worthy of this award. I hope and pray all are safe with the current happenings worldwide, and we get back to normalcy soon. Rock Chalk!”

The Atlanta Tipoff Club’s board of selectors, comprised of leading journalists from around the country, selected the winners, basing their selections on outstanding on-court defensive performances during the 2019-20 regular college basketball season.