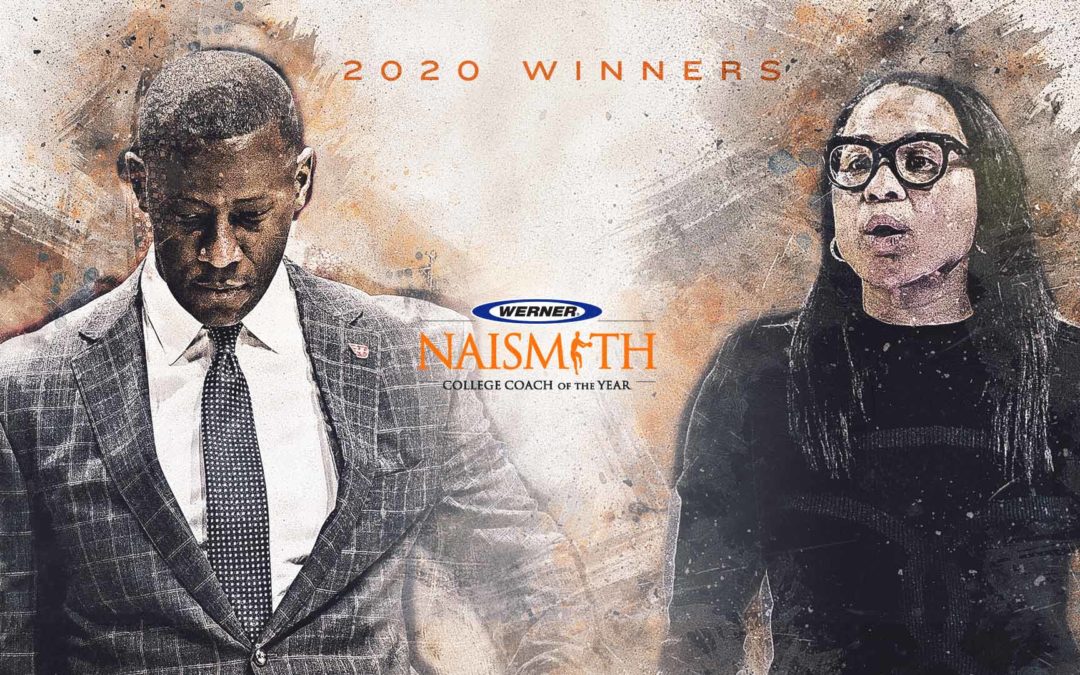 “Dawn and Anthony had remarkable coaching efforts, which was evident in how their teams performed throughout the entire regular season, culminating with a conference championship and top-tier national ranking,”  said Eric Oberman, executive director of the Atlanta Tipoff Club. “We’re honored to have Dawn and Anthony join a long history of impressive coaches who have been named the Werner Ladder Naismith Coach of the Year.”

Staley won the top honor by edging out the other three finalists:  Adia Barnes (Arizona), Kelly Graves (Oregon) and Joe McKeown (Northwestern). After leading her team to an SEC regular-season championship for a fifth time, Staley coached the Gamecocks to victory in the SEC Tournament. She led her team to a perfect 16-0 conference record and 32-1 overall, ending the season on a 26-game winning streak. Staley was also named SEC Coach of the Year.

“It is truly an honor to receive the Naismith National Coach of the Year, and, while I’m the one receiving the award, every head coach knows you cannot be a good coach without great assistants, great support staff and great players. So, this award is every bit as much theirs as it is mine,” said Staley. “We are blessed at the University of South Carolina to have the best FAMS in the nation—they’re so close to our program that we call them FAMS as in family. They support us every day, on the court and off it, and it is my hope that during this trying time in our nation, when games like basketball seem so distant, that reading about this award gives those fans a little bit of joy and reminds them a little of what we can all look forward to when we come through this time on the other side. To the Naismith committee, to my staff, to our players and to our FAMS – thank you – and I can’t wait to get back on the court!”

Grant was named the Werner Ladder Naismith Coach of the Year over fellow finalists Scott Drew (Baylor), Brian Dutcher (San Diego State) and Leonard Hamilton (Florida State). A former Dayton Flyer himself, he coached his alma mater to an undefeated conference season and a 29-2 record overall. Named the Atlantic 10 Coach of the Year, Grant led his team to a program record of 29 wins in a season and ended the regular season on a 20-game win streak. Under his leadership, the Flyers became the first team in the conference to go 18-0 in conference play in the past 35 years.

“I would like to thank the Atlanta Tip-Off Club and the Naismith committee for this tremendous honor. I would also like to offer my congratulations to the other finalists on their outstanding seasons,” said Grant. “I’m extremely grateful for the commitment, dedication and sacrifices of our players, coaches, and support staff to help make this past season so special and this award possible.”

Later this year, Staley and Grant will each be presented with a Werner Ladder Naismith Coach of the Year commemorative trophy designed by nationally acclaimed sculptor Brian Hanlon. The bronze trophy features Dr. James Naismith, inventor of basketball, holding the original peach basket and ball used to play the first game. The winners were chosen by the Atlanta Tipoff Club’s national voting academy, comprised of leading journalists from around the country, current and former head coaches, former award winners and conference commissioners, all of whom base their selections on outstanding coaching performances during the 2019-20 regular college basketball season. Additionally, the Naismith fan vote accounted for 5% of the overall vote. The vote was tabulated and certified by Aprio, a premier CPA-led business advisory firm, headquartered in Atlanta.

“We congratulate Dawn and Anthony on their first win of the Werner Ladder Naismith Coach of the Year Award and for their hard work and success this basketball season,” said Stacy Gardella, vice president of brand marketing at WernerCo. “We look forward to watching these coaches as they continue their careers by inspiring players and leading their teams to victory.”

Both Staley and Grant have players included as finalists for the Citizen Naismith Trophy. South Carolina’s Tyasha Harris and Staley would become the 14th coach-player duo to sweep the women’s Naismith Awards, joining last year’s winners, Iowa forward Megan Gustafson and coach Lisa Bluder. In 1991, Staley and her coach, Debbie Ryan, were the second player and coach in the history of the awards to take home both honors. With Obi Toppin as a finalist for the Citizen Naismith Trophy, Dayton looks to become the sixth school with a men’s player and coach to win the Naismith Awards in the same year. The most recent men’s player-coach duo, St. Joseph’s Jameer Nelson and Phil Martelli (2004), is also the most recent win of either award for the Atlantic 10 conference. The winner of the Citizen Naismith Trophy for Men’s and Women’s Player of the Year will be presented live on Friday, April 3 at 12 p.m. ET on CBS Sports HQ, which is available for free at CBSSports.com and on the CBS Sports app for mobile and connected TV devices.