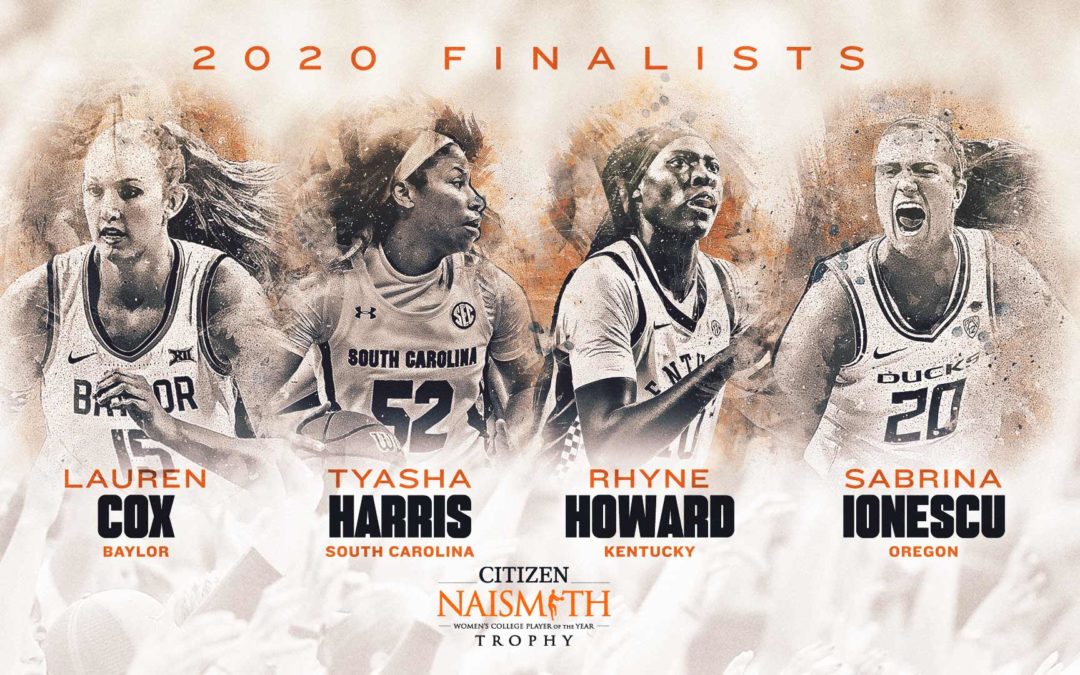 Cox, Harris, Howard and Ionescu Vying for the Women’s Player of the Year Honor

Howard and Ionescu, who was a 2019 finalist for the award, seek to become the first players from their schools to win a Citizen Naismith Trophy. Harris would become the second winner from South Carolina, joining 2018 winner A’ja Wilson. South Carolina Head Coach Dawn Staley (who is a current finalist for the Werner Ladder Naismith Women’s Coach of the Year Award) also took home the Citizen Naismith Trophy in 1991 and 1992 while playing for the University of Virginia. Cox would also become the second player from Baylor to win the Citizen Naismith Trophy for Women’s Player of the Year, joining the 2012 and 2013 winner, Brittany Griner. Howard would become only the fifth sophomore to take home the honor with the most recent being UConn’s Breanna Stewart, who won the first of her three trophies in 2014.

“We saw throughout the regular season that each of the four finalists had the talent and commitment it takes to win the 2020 Women’s Citizen Naismith Trophy,” said Eric Oberman, executive director of the Atlanta Tipoff Club. “While their seasons ended earlier than they would have hoped, we want to honor the skill and determination they had on the court, awarding one of these players with the Women’s Player of the Year honor.”

Beginning today, fans will have a chance to vote for their favorite finalist through April 1, by visiting naismithfanvote.com to cast their ballot. The fan vote will account for five percent of the overall vote. The 2020 Citizen Naismith Trophy for Women’s Player of the Year is scheduled to be announced on April 3, 2020, and the winning player will be awarded with the Citizen Naismith Trophy, produced and provided by Herff Jones, leading provider of graduation and educational products and services designed to inspire achievement and create memorable experiences for students. A replica trophy will be donated by Herff Jones to the respective school in recognition of award recipient. The award ceremony will be held on a later date.

“These players have shown the dedication and drive worthy of the Women’s Citizen Naismith Trophy,” said Eric Horowitz, managing director U.S. and travel retail, Citizen Watch Company of America, Inc. “We had the pleasure of watching this elite group play this season and look forward to honoring one of them with the Citizen Naismith Trophy based on their outstanding play during the regular season.”

The Citizen Naismith Trophy, originally sculpted in 1982 by Atlanta’s Marty C. Dawe, has become one of the most prestigious individual national basketball honors. The four finalists were chosen by the Atlanta Tipoff Club’s national voting academy, comprised of leading journalists from around the country, current and former head coaches, former award winners and conference commissioners, all of whom base their selections on outstanding on-court performances during the 2019-20 regular college basketball season. The vote was tabulated and certified by Aprio, a premier, CPA-led business advisory firm.