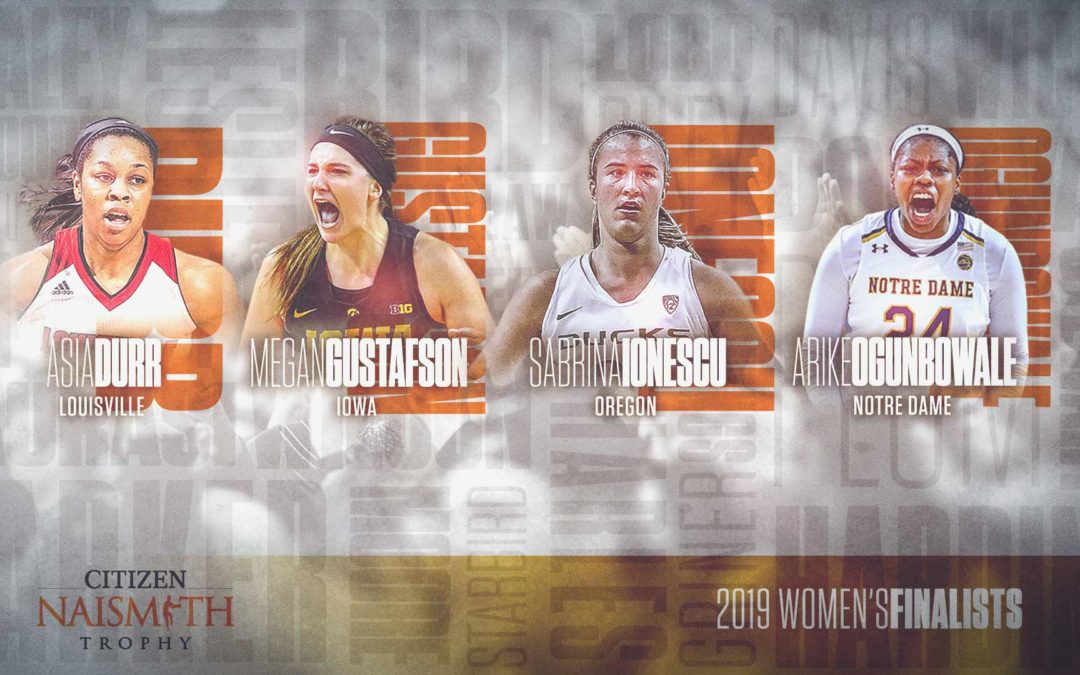 Durr, Gustafson, Ionescu and Ogunbowale Vying for the Women’s Player of the Year Honor

ATLANTA (March 22, 2019) – Ahead of the NCAA Tournament tip off, the Atlanta Tipoff Club has announced the four finalists competing for the 2019 Citizen Naismith Trophy, recognizing the most outstanding women’s college basketball player. The finalists for the Women’s Player of the Year include Asia Durr (Louisville), Megan Gustafson (Iowa), Sabrina Ionescu (Oregon) and Arike Ogunbowale (Notre Dame).

“Each of the four finalists has the talent and commitment it takes to win the 2019 Women’s Citizen Naismith Trophy,” said Eric Oberman, executive director of the Atlanta Tipoff Club. “As the tournament begins, we look forward to watching these players lead their teams toward a championship, while they compete for the individual Women’s Player of the Year honor.”

Beginning today, March 22, fans will have a chance to vote for their favorite finalist through April 3, by visiting naismithfanvote.com to cast their ballot. The fan vote will account for five percent of the overall vote. The 2019 Citizen Naismith Trophy for Women’s Player of the Year will be announced on April 6, 2019, and the winner will be honored at her school on a later date.

“These players have shown the dedication and drive worthy of the Women’s Citizen Naismith Trophy,” said Eric Horowitz, managing director U.S. and travel retail, Citizen Watch Company of America, Inc. “We are excited to watch them play and compete in the tournament and for the top honor.”

The Citizen Naismith Trophy, originally sculpted in 1982 by Atlanta’s Marty C. Dawe, quickly became one of the most prestigious individual national basketball honors. The winner will be awarded with the Citizen Naismith Trophy, produced and provided by Herff-Jones, the leading provider of graduation and educational products and services, including class rings and jewelry. A replica trophy will be donated by Herff-Jones to the player’s college.

The four finalists were chosen by the Atlanta Tipoff Club’s national voting academy, comprised of leading journalists from around the country, current and former head coaches, former award winners and conference commissioners, all of whom base their selections on outstanding on-court performances during the 2018-19 college basketball season. The vote was tabulated and certified by Aprio, a premier, CPA-led business advisory firm.